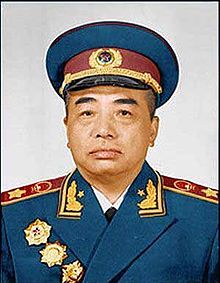 Peng Dehuai (1898-1974, Wade-Giles: P’eng Te-huai) was one of the most able military commanders in communist China, rising to become Mao Zedong‘s defence minister.

Born in Hunan province, Peng ran away from home and worked in low paid labouring jobs before joining the private army of a local warlord. In 1926 he joined Jiang Jieshi‘s Nationalist army and participated in the Northern Expedition.

Two years later, Peng joined the Chinese Communist Party (CCP) and returned to his native Hunan, where he worked closely with Mao Zedong and Zhu De. Peng later served as Red Army commander on the Long March, in the Sino-Japanese War and the Korean War.

A rough and pragmatic figure who often spoke as he thought, Peng was respected both in the upper echelons of the CCP and by the men under his command. He was also trusted by Mao, who in 1954 recalled Peng to Beijing and appointed him defence minister.

By 1959, Peng had became disillusioned with the disastrous effects of the Great Leap Forward, expressing guarded criticisms of Mao’s economic policy in a private letter to the Chairman.

In July 1959, Mao unveiled this letter at the Lushan conference, using it to orchestrate Peng’s downfall. Peng was replaced as defence minister by Lin Biao, removed from positions of importance and stripped of his military rank. Three years later, Peng petitioned the government for his rehabilitation, writing a lengthy letter expressing self-criticism and admitting fault – but his pleas fell on deaf ears.

After years of virtual house arrest, Peng was persecuted by the Red Guards during the Cultural Revolution and subjected to prolonged public humiliation, torment and abuse.

Like former president Liu Shaoqi, Peng was imprisoned and denied medical treatment, which contributed to his death in 1974.