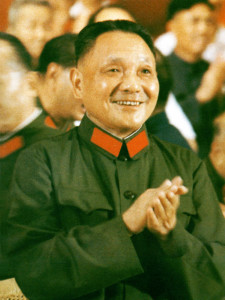 Deng Xiaoping (1904-1997) was a Chinese revolutionary, politician and economic reformer who became the leader of the People’s Republic after the death of Mao Zedong.

Deng was born into a middle-class family in Sichuan province. At age 15, Deng left China to study and work in France. It was there he was first exposed to Marxist ideas and joined the Chinese Communist Youth League.

Deng spent time studying in Moscow before returning to China in 1927. He became active in the Chinese Communist Party (CCP) and rose through party ranks, participating in the Long March and leading military campaigns against the Japanese and the Nationalists.

Deng became the party’s general secretary in 1954. For most of the 1950s, he was a firm supporter of Mao Zedong, however, the devastating effects of the Great Leap Forward led Deng to distance himself from Mao’s radical economic vision.

Deng was more an economic pragmatist than a socialist ideologue. His aim was recovery first and socialism second, a view espoused in Deng’s famous remark “It matters not whether a cat is black or white, so long as it catches mice.”

After Mao’s sidelining from power in 1959, China’s economic policy was steered by Deng, Liu Shaoqi, Chen Yun and Zhou Enlai. This group initiated sweeping economic reforms such as the restoration of private land ownership, a reduction in the size of agricultural collectives and the restoration of the market. These changes allowed the economy to slowly recover in the early 1960s.

Deng’s reforms were watched with a disapproving eye by Mao Zedong, who considered them a capitalist deviation from his revolutionary vision. When Mao initiated the Cultural Revolution in 1966, Deng was immediately targeted, though not as brutally as Liu Shaoqi.

Deng was eventually purged from the government and the party and forced to relocate to a rural province, where he worked making tractor parts. The Red Guards also victimised Deng’s family, pushing his son Deng Pufang out of fourth storey window, an incident which left him a paraplegic.

Deng Xiaoping remained in the political wilderness for eight years. In 1974, Zhou Enlai, who was himself in the early stages of a terminal illness, convinced Mao to restore Deng and appoint him vice-premier. Deng returned and became an influential member of the government.

When Zhou Enlai died in January 1976, Deng was targeted again, this time by the ‘Gang of Four’, who viewed Deng as their main rival for power. The death of Mao Zedong and the Gang of Four‘s fall and arrest allowed Deng to rebuild his position in the CCP for the third time.

By 1981 Deng had become premier of the People’s Republic and head of the Communist Party. He became, according to one historian, a “Chinese Khrushchev”, calling for an open and honest examination of the Maoist regime and some criticism of its policies. He did not let this criticism extend too far, however, saying in 1980:

“The banner of Mao Zedong Thought can never be discarded. To throw it away would be to negate the glorious history of our Party. It would also be ill-advised to say too much about Comrade Mao Zedong’s errors. To say too much would be to blacken Comrade Mao, and that would blacken the country itself. That would go against history.”

Deng remained the most powerful leader in China until his resignation in 1992. He died five years later, aged 92.