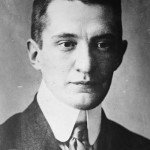 Alexander Kerensky (1881-1970) was a left-wing political leader who vied with Lenin for control of Russia during the tumultuous months of 1917. Ironically, Kerensky was born and raised in Simbirsk, also Lenin’s hometown; his father had been a teacher at Lenin’s school and later gave the future Bolshevik leader a written reference. Kerensky trained as a lawyer and provided advice to individuals who had been mistreated by the government. In 1912 he was elected to the fourth Duma as a member of the labour-aligned Trudovik party; he quickly took a lead role into investigations into the Lena River shootings that year. In March 1917 Kerensky was appointed Minister of Justice in the new Provisional Government, the only socialist in the cabinet. A series of government breakdowns enabled him to rise to War Minister (May) and then prime minister (July), largely because of his ambition and brilliant oratory. But Kerensky’s support for the war and his failed June Offensive in Galicia eroded his support and made him a target for more radical socialists. By September 1917 he had alienated those on the political Left and Right, while the Provisional Government commanded little support from either the people or the military. Kerensky fled the Winter Palace during the October Revolution, married an Australian woman and made his home in the United States, where he worked as an academic. (See also Alexander Kerensky) 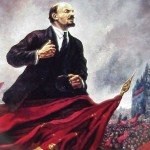 Vladimir Lenin (1870-1924) was the Bolshevik leader, the instigator of the October Revolution and, until his death, the dominant figure in the new society. He was born Vladimir Ilyich Ulyanov (‘Lenin’ was a revolutionary codename adopted later) in Simbirsk, his father a former peasant who had become a successful teacher. The Ulyanovs were politically aware and liberal minded, regularly discussing – and criticising – Russian government and society. In 1887 Lenin’s older brother, Aleksandr, was arrested and executed for involvement in an assassination plot against Tsar Alexander III. This had a profound effect on the young Lenin, who began studies in law while mixing with radical student political groups. By the mid-1890s Lenin had met his future wife, Krupskaya, and was involved in Marxist groups in St Petersburg. In 1895 Lenin was forced out of western Russia and into exile, where he would spend 18 of the next 22 years. He lived as a European nomad, spending time in London, Paris, Munich and Geneva and writing extensively about Marxism and contemporary political and economic systems. In 1902 Lenin published What is to Be Done?, a cry for better organisation and discipline in Marxist revolutionary groups. The following year he put these ideas into practice by forcing a split in the Social Democrats, Russia’s largest Marxist party. Lenin’s faction was dubbed the Bolsheviks (‘majority’). Lenin was soon forced back into foreign exile but the abdication of the tsar in 1917 allowed him to return to Russia. Arriving in April, he took command of the situation by issuing his April Theses, which demanded “Peace, Bread and Land” for the people, a boycott of the Provisional Government and socialist revolution at the earliest opportunity. From that point forward, the fate of the Russian Revolution – and indeed Russia – was shaped if not written by Lenin’s impatient and obsessive determination to craft a socialist state. (See also Vladimir Lenin) 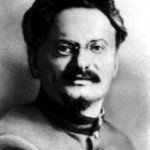 Leon Trotsky (1879-1940) was a leading socialist writer, thinker and organiser, the second-most influential revolutionary after Lenin. Born Lev Bronstein to a Jewish-Ukrainian family, Trotsky became involved in Marxist groups while a student. He attended the 1903 Social Democratic party congress, where he sided with Julius Martov and the Mensheviks, but he later attempted to reconcile and reunite the party’s divided factions. Trotsky made important contributions to the 1905 Revolution, particularly in the formation and organisation of the St Petersburg Soviet. He was later arrested and forced into exile, before escaping abroad. Trotsky returned to Russia in 1917 and over the course of the year began to align with Lenin and the Bolsheviks. In October he oversaw the operations of the Military Revolutionary Committee and the Red Guards; the Bolshevik revolution later that month succeeded largely because of Trotsky’s planning. In the new society, he served as Commissar for War, playing critical roles in the Treaty of Brest-Litovsk, the emergent Red Army and the Civil War. Trotsky was viewed as the natural successor to Lenin – but he also alienated several individuals in the Bolshevik party, which allowed Stalin to undermine and replace him after Lenin’s death. Trotsky went into exile and wrote extensively about the revolution and left-wing politics in general before he was murdered by a Stalinist agent in Mexico. (See also Leon Trotsky)