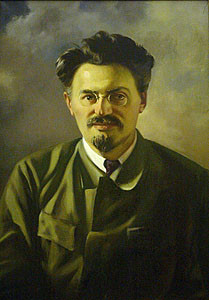 Leon Trotsky was a significant figure in Marxist theory and politics and a crucial figure in the Russian Revolution. He played a significant role in the organisation of the October Revolution, led peace negotiations at Brest-Litovsk and as commissar for war, helped form and shape the Red Army. Often viewed as a likely successor to Bolshevik leader Vladimir Lenin, Trotsky was outmanoeuvred by Joseph Stalin, expelled from the Communist Party and forced into exile.

Trotsky was born in Yanovka, Ukraine in 1879, the son of a prosperous farmer. His parents were Jewish and although they were not religious, they were often the target of the hateful anti-Semitism that infected tsarist Russia.

Trotsky was given the name Lev Bronstein after an uncle who had unsuccessfully attempted to assassinate Alexander II (there was a revolutionary streak in his family, as there had been in Lenin’s).

Sent away to boarding school, the young Bronstein became involved in revolutionary politics, first as a member of the Narodniki. In his late teens, he became a union organiser and socialist propagandist. He became interested in Marxism and joined the Social Democrats (SDs) in 1896.

In 1900, Bronstein was arrested and sentenced to four years’ exile in Siberia. He escaped in 1902 with a forged passport bearing the adopted name by which he later became known: Leon Trotsky.

Trotsky took up residence in London where, in 1903, he attended the Second Congress of the Social Democratic Party. When the party voted on the issue of organisation and membership, Trotsky sided with Julius Martov and the faction that became known as the Mensheviks.

Unlike Lenin, Trotsky was in Russia during the 1905 Revolution. He was elected vice-chairman and then chairman of the Petrograd Soviet, despite being just 26 years old. When the Soviet was crushed by tsarist troops in late 1905, Trotsky was again sent to Siberia, though he quickly escaped. He spent most of the next decade in exile, mainly in France, Switzerland, Spain and the United States.

Attempts to reconcile the SDs

In the early 1910s, Trotsky made several attempts to reconcile Lenin, Martov and their followers. When the Bolshevik and Menshevik factions split irrevocably in early 1912, Trotsky attempted to undo the damage by organising a ‘unity congress’, a move that failed. He later collaborated with the Mezhraiontsyi, a group of intellectuals who strived for party reconciliation.

At the start of 1917, Trotsky was living in New York. After hearing news of the February Revolution, he immediately returned to Russia, arriving in May 1917.

Over the course of 1917, Trotsky began to lose faith in the Menshevik movement and drew closer to the ideas and strategies of Lenin. A pivotal moment in this transformation was the popular but ultimately unsuccessful ‘July Days‘ uprising. It convinced Trotsky that without strong leadership from a committed revolutionary party, the people were incapable of seizing power.

Alignment with the Bolsheviks

Trotsky himself worked for the Bolshevik cause in the Petrograd Soviet, where he was elected chairman again in early October. He also took a leading role in organising and arming the Red Guards, a pro-Bolshevik militia comprised of factory workers.

According to many historians, while Lenin was the driving force behind the October Revolution, Trotsky’s organisation and strategic planning ensured that it was a success.

Early in October, Trotsky introduced a resolution into the Bolshevik-controlled Petrograd Soviet that called for the formation of a military committee to prepare the “revolutionary defence of Petrograd”. The resolution was passed and the Military Revolutionary Committee (MRC, or Milrevcom) was formed.

In theory, the Milrevcom and the Red Guards were formed to protect the Bolshevik movement and its leaders – but in reality, they were tools for an armed insurrection against the Provisional Government.

Trotsky also joined the Bolshevik Central Committee, where he supported Lenin’s calls for a socialist revolution. Joseph Stalin, later Trotsky’s bitter rival, wrote in 1918 that “all practical work in connection with the organisation of the uprising was done under [Trotsky’s] immediate direction … the Party is indebted primarily and principally to Comrade Trotsky for the efficient manner in which the work of the Military Revolutionary Committee was organised.” Once Stalin had seized the reins of power, this passage was expunged from official records. 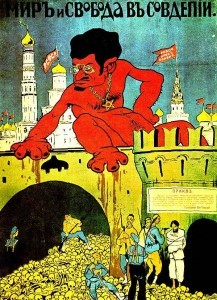 Trotsky’s importance continued into the new society. He was an important member of the Communist Party Politburo and the lead negotiator with the Germans at Brest-Litovsk. Trotsky’s organisation of the Red Army and political and military leadership during the Civil War was also critical. He was also responsible for suppressing the Kronstadt rebellion in early 1921.

Trotsky was not without his faults. He was a rousing public speaker and a brilliant theorist and organiser – but was prone to arrogance, dismissiveness and sarcasm, qualities that made him unpopular with other Bolsheviks. These shortcomings were identified by Lenin in his 1922 ‘political testament’, where he acknowledged Trotsky’s talents but noted that he “displayed excessive self-assurance and… excessive preoccupation with the purely administrative side of the work.”

Trotsky’s over-confidence proved fatal when Stalin, his rival for the Bolshevik leadership, recruited others against him and seized control of the party in the early 1920s. By Lenin’s death in early 1924, Trotsky had been virtually excluded from power. Stalin eventually had him expelled from the Soviet Union in 1929.

Trotsky spent the rest of his life in exile in France and then Mexico, where he wrote prolifically. In 1930, he penned a history of the Russian Revolution. Several years later, he wrote a scathing criticism of Russia under Stalin, titled The Revolution Betrayed.

Back in Russia, Stalinist propaganda demonised Trotsky as a traitor, a saboteur and an enemy of the state. Trotsky was virtually written out of official Soviet histories of the revolution, while many of the problems of the new society were laid at his feet.

In 1940, a Stalinist agent, Ramon Mercarder, was able to gain entry to Trotsky’s home in Mexico and stab him in the head with an icepick. Trotsky died the following day.

A historian’s view:
“Trotsky moved like a bright comet across the political sky. He first came to global attention in 1917. By all accounts, he was the finest orator of the Russian Revolution. He led the Military-Revolutionary Committee… He did more than anyone to found the Red Army. He belonged to the party Politburo and had a deep impact on its political, economic and military strategy. The whole world attributed the impact of the October Revolution to his partnership with Lenin. [But] before 1917 Trotsky had been an enemy of Bolshevism, and many Bolsheviks did not let him forget it.”
Robert Service

1. Leon Trotsky, born Lev Bronstein, was a Marxist writer, orator and organiser became a significant leader in the Bolshevik party and the Soviet republic.

2. At the Second Congress of the Social Democrats in 1903, Trotsky sided with the Mensheviks against Lenin, though he later sought to reconcile the two factions.

3. In 1917, Trotsky returned from exile in the United States and by the middle of the year was working with the Bolsheviks, especially in the Petrograd Soviet.

4. Trotsky organised the Red Guards and Milrevcom and supported Lenin’s call for an armed insurrection. The October Revolution was largely due to his tactical planning.

5. Trotsky later negotiated peace with the Germans at Brest-Litovsk, served as Commissar for War, formed the Red Army, led the Civil War effort and was a pivotal member of the Politburo. He was eventually sidelined from positions of power by his rival, Stalin.