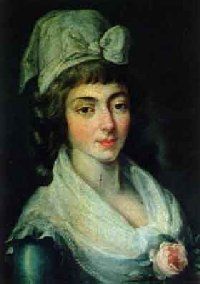 Madame Roland (1754-1793) was an influential female revolutionary, usually associated with the Girdonin faction.

Born Marie-Jean Phlippon in Paris, she became an avid reader and a student of Enlightenment writers like Voltaire and Rousseau. In 1781, she married Jean-Marie Roland, a successful businessman and economist from Lyon.

In 1791, Jean-Marie Roland was invited to Paris to provide advice to the government. He decided to remain and was offered a ministerial post in the Girondin-dominated government. His wife, meanwhile, operated one of the best known and most politically oriented salons in the capital.

Madame Roland’s political views were moderate: she loathed the sans culottes, the gutter press and radicals like Marat, Danton and Robespierre.

According to contemporary reports and some historians, Madame Roland exerted considerable influence on her husband’s political views – and even his policies, some of which were said to have been drafted by Madame Roland herself, rather than Jean-Marie.

When her husband was forced to flee Paris in 1793, Madame Roland bravely remained. She was arrested in June and guillotined in November, her famous last words being “Oh liberty, what crimes have been committed in thy name?”