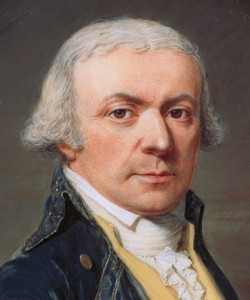 Charles Francois Dumouriez (1739-1823) was a French military commander, famous for leading and then abandoning the national army during the Revolutionary War, eventually defecting to the Austrians.

Dumouriez was educated in Paris before joining the army in 1757 and obtaining an officer’s commission. He rose through the ranks to become a member of the royal secret service and a military advisor to the royal government.

During the revolution, Dumouriez was politically active as a moderate. He was a foundation member of the Jacobin Club and a great admirer of both Mirabeau and Lafayette.

In 1791, Dumouriez offered his services to the National Assembly in the wake of the king’s attempt to flee the country. Concerned about the growing radicalism and unrest in Paris, he aligned himself with the Girondins in late 1792.

Held responsible for military defeats in early 1793, Dumouriez tried to organise a counter-revolutionary assault on Paris but was unable to rally enough support from his troops. In April, he defected to the Austrians, an incident that discredited Dumouriez’s Girondinst supporters in the National Convention.

For the rest of his life, Dumouriez wandered Europe in exile, finally settling in Britain.

Citation information
Title: “Charles Dumouriez”
Authors: Jennifer Llewellyn, Steve Thompson
Publisher: Alpha History
URL: https://alphahistory.com/frenchrevolution/charles-dumouriez/
Date published: May 28, 2017
Date accessed: January 27, 2023
Copyright: The content on this page may not be republished without our express permission. For more information on usage, please refer to our Terms of Use.