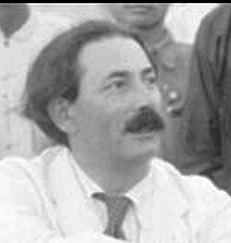 Mikhail Borodin (1884-1951), born Mikhail Markovich Gruzenberg, was a Comintern adviser to the Guomindang from 1923.

Born into a Jewish family, Borodin joined the Bolshevik Party in 1903 and worked with its leader, Vladimir Lenin, as a revolutionary. In 1906, Borodin went into exile, initially in England and then in the United States, after Tsar Nicholas II cracked down on revolutionary activity in Russia. During this time Borodin worked as a school teacher while studying revolutionary politics and methods.

He returned to Russia in 1918 in the aftermath of the Bolshevik revolution and joined the Communist International, or Comintern, a committee tasked with supporting the worldwide growth of communism. Between 1919 and 1922 Borodin assisted new and growing communist parties in Europe, the United States and Mexico.

In 1923, Borodin became the Comintern’s chief agent and led a group of Russian advisors to Guangzhou after Sun Yixian requested support from the Comintern. Sun had established a military government in Guangzhou after the death of Yuan Shikai and the rise of the warlords.

In Guangzhou, Borodin reorganised both the Guomindang and the Chinese Communist Party, incorporating Leninist principles of democratic centralism. He was also a major influence on the development of the Huangpu Military Academy, which trained officers for the Guomindang-led military force.

Politically, Borodin managed to facilitate an uneasy truce between the left and right, negotiating the First United Front. He also arranged Soviet arms shipments, enabling the Guomindang army to defeat the warlords as they moved north. Borodin became Joseph Stalin’s ‘man in China’, sparking some resentment from the communists, who felt undermined by Moscow’s support for the Guomindang. But in 1927 Borodin sided with the left wing Wuhan government, incurring the wrath of the anti-communist Jiang Jieshi.

After the Shanghai Massacre of April 1927 and the establishment of Jiang’s government in Nanjing, Borodin was forced to leave China. On his return to Russia, he served as government commissar [minister] for labour, deputy chief of the Tass news agency and editor of the Moscow Daily News.

Borodin was arrested in 1949 in a wave of anti-Semitic repression and died in prison in 1951.