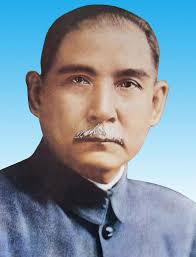 Sun Yixian (1866-1925, Wade-Giles: Sun Yat-sen) was an important early 20th century political leader, writer and philosopher. So significant was Sun’s contribution in the early stages of the revolution that many consider him the ‘father of modern China’.

Sun Yixian was born into a middle-class family in Guangzhou province, southern China. As a child, he was educated in Hawaii before completing a medical degree in Hong Kong. During his time in Hong Kong Sun was baptised as a Christian and married Soong Ching-Ling, sister of the future wife of Jiang Jieshi.

After qualifying as a doctor Sun travelled through Asia, Europe and the United States. While abroad he worked busily setting up and promoting nationalist and Republican groups like the Revive China Society (formed in Hawaii in 1894) and the Tongmenghui (formed in Japan in 1905). Sun’s anti-Qing activities made him unwelcome in China, so he spent almost two decades in exile.

In 1905, Sun began to articulate the political philosophy for which he is best known: his Three Principles of the People. Sun and the Tongmenghui also organised or sponsored several anti-Qing uprisings, all of which failed.

Ironically, Sun was in the United States in 1911 and had no direct involvement in the Wuchang uprising or the ensuing Xinhai Revolution. He returned to China in November 1911 and the following month was elected president of the provisional republican government.

In March 1912, Sun surrendered the presidency to Yuan Shikai, after making a deal to secure the abdication of the Qing emperor Puyi. Sun began the struggle to restore the abortive republican national government – first against the imperial ambitions of Yuan Shikai, then against the divisions created by warlordism. In August 1912, Sun and his followers consolidated several smaller groups into a single nationalist party called the Guomindang.

For the rest of his life, Sun’s leadership was concerned with building a political party and military apparatus that could reunify China. In 1921, he formed a Guomindang-led government in Guangzhou province. Sun also forged a working alliance with the Comintern and leadership of the Soviet Union, who provided moral and financial support and assisted with the formation of the Huangpu Military Academy (1924).

Under Sun’s tutelage, the Guomindang cleared the path for Chinese reunification, however, Sun himself did not live to see it, passing away from liver cancer in March 1925.

So broad and generally accepted were Sun’s political philosophies that both the nationalist Guomindang and the Chinese Communist Party claim Sun Yixian as an ideological figurehead.