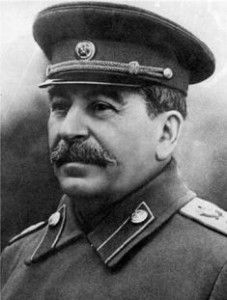 Joseph Stalin (1879-1953, born Josef Dzhugashivili) was a Russian communist revolutionary and, from the late 1920s, the dictatorial leader of the Soviet Union. Stalin’s de facto leadership of world communism shaped the development of the Chinese Communist Party (CCP) and the Chinese Revolution itself.

Born into a peasant family in Georgia, Stalin studied for entry into the priesthood before leaving the seminary and becoming involved in radical politics. He joined the Bolshevik revolutionary movement under Vladimir Lenin, raising funds for the group through bank robbery and extortion.

By the 1917 revolution in Russia, Stalin had risen into the senior ranks of the Bolshevik party, though he was not among its intellectual leaders. When Lenin was incapacitated by a major stroke in 1922, Stalin began to accumulate support in preparation for a charge at the leadership.

After Lenin’s death in 1924, Stalin outmanoeuvred his main rival Leon Trotsky, eventually forcing him into exile. By the late 1920s, Stalin was the unchallenged ruler of the Soviet Union. He implemented his own policies, including ‘socialism in one country’ (a retraction from international socialism), expansion of the military, rapid industrial growth and the collectivisation of Russian peasant farms. Stalin’s agricultural policies were the main cause of the 1932-33 Soviet famine which killed as many as eight million people, most of them in Ukraine.

Stalin was even more ruthless with suspected political rivals and enemies of the state. Under his rule, the Soviet Union became notorious for its purges, show trials, secret police, surveillance of citizens, censorship, propaganda, torture and extra-legal killings. Stalin also authorised an intense personality cult that painted him as a strong but benevolent ruler.

Influence on the Chinese Revolution

As the leader of the world’s largest socialist state, Stalin exerted considerable influence on both the young Chinese Communist Party (CCP) and the Chinese Revolution.

Through the Moscow Comintern, Stalin provided early support and direction for the CCP – but he thought the Chinese party too small and weak to initiate a socialist revolution. Instead, Stalin chose to back Jiang Jieshi and the Guomindang. He hoped to exploit their military strength, waiting for a time when communists could infiltrate and seize control of the Guomindang.

After the Shanghai Massacre of April 1927, Stalin supported the formation of a Chinese Red Army and peasant soviets in rural areas. His chief concern in the 1930s, however, was preventing China from being overrun by Japanese imperialists. As a consequence, Stalin maintained support for both the CCP and the Nationalists.

The relationship between Stalin and CCP leader Mao Zedong was complex. In public, Mao heaped praise on Stalin, hailing him as a visionary leader and a friend to Chinese communists. In private, however, the two leaders had significant ideological differences, coupled with a low regard for each other.

Mao and Stalin did not meet until late 1949, during Mao’s state visit to Moscow. It did not go well, Stalin snubbing Mao and offering a paltry amount of military aid. Stalin also hinted at a willingness to commit Soviet forces if war broke out on the Korean peninsula.

When the Korean War erupted in 1950, Stalin refused to deploy ground forces, providing only some air support. He also provided the Chinese with weapons and munitions but insisted they be charged full price. These incidents and broken promises taught Mao never to trust Stalin again, though in public he maintained his praise of the Soviet leader.

Stalin died in 1953, leaving Mao as the world’s most senior communist leader.