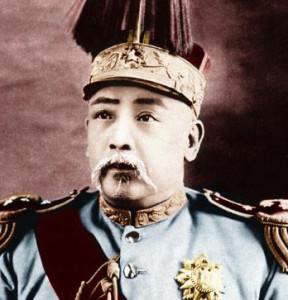 Yuan Shikai (1859-1916, Wade-Giles: Yuan Shih-kai) was a high ranking Qing military commander and president of the first Chinese republic from 1912 to 1916. A military strongman rather than a political leader, Shikai’s attempt to revive the monarchy and install himself as emperor sounded the death knell for the republic.

Shikai was born in rural Henan and received a good education, however after failing the imperial examinations he chose to join the Qing national army. In the 1880s, Shikai was sent to Korea to train forces there; he subsequently became Beijing’s ambassador to Korea, advising local leaders and preventing a Japanese coup.

In 1895, Shikai was recalled and given command of the modernised New Army in northern China. He retained the loyalty of this army until his death – and it would later prove a valuable political tool.

In 1898, Shikai aligned with Dowager Empress Cixi during the reaction to the Hundred Days’ Reforms, helping her to elbow the Guangxu Emperor from power. He was appointed as governor of Shandong province in 1899 and refused to aid or support the Boxer Rebellion brewing there. He later ignored Cixi’s instructions, using his New Army troops to suppress the Boxers rather than support them.

Shikai continued to accumulate power after the Boxer Rebellion, to the extent that some in the Qing court feared he might lead a military coup. In 1907 Shikai was stripped of his political offices and forced into retirement – but the death of Cixi in 1908 meant that Yuan Shikai was not yet out of the picture.

At the outbreak of the Xinhai Revolution in October 1911, Yuan Shikai’s political views were uncertain. His control of the New Army, China’s most powerful military force, made Shikai an important figure; as a consequence, he was courted by both the Qing and the Republicans.

In late 1911, Shikai commanded his army in battle against republican revolutionaries at Yangxia. A week later, he changed sides again after Sun Yixian offered him the presidency in a post-Qing republican government.

From president to aspiring emperor

Shikai was duly sworn in as president in February 1912.  As China’s first Republican president, Shikai enjoyed the respect of conservatives and foreign powers. He had no personal commitment to republicanism or democracy, however, and much of his presidency was spent working to undermine or weaken the elected National Assembly.

Shikai’s last significant political act was an attempt to revive the monarchy. In December 1915, a puppet assembly convened by Shikai petitioned him to restore imperial rule and accept the title of emperor. This was met with condemnation and widespread opposition, both inside China and from foreign powers, most notably Japan. By March 1916, Shikai had all but abandoned the plan. He died just three months later.