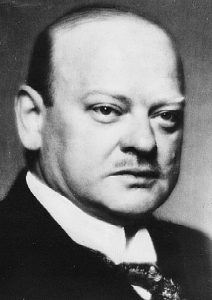 Gustav Stresemann (1878-1929) was a German politician, Reichstag deputy and, for a brief time in 1923, chancellor. As foreign minister, Stresemann became one of the most significant and effective leaders of the Weimar Republic.

Stresemann was born in Berlin, the son of a Protestant publican, brewer and beer salesman. The family was lower-middle-class and the quiet, scholarly Gustav was the only one of five children able to complete high school and enrol at university.

In 1897, Stresemann began studying history and literature at the University of Berlin. He later changed to economics, probably to increase his prospects of employment. After completing a doctorate, Stresemann spent the next decade working as an administrator for various trade associations.

Stresemann’s interest in politics began at university and continued into his professional life. He joined the National Liberal Party in 1903 and demonstrated progressive views, such as support for state-funded social welfare measures. After serving six years on the city council of Dresden, Stresemann entered the Reichstag in 1907.

As a young man, Stresemann’s views were liberal – but by his 30s he had become more nationalist and conservative. During World War I, Stresemann supported the monarchy and the war effort and backed calls for unrestricted submarine warfare. As the Weimar Republic was emerging in late 1918, Stresemann co-founded the right-wing German People’s Party (DVP).

Despite his association with right-wing nationalists, Stresemann became a pragmatist who was prepared to work with his political opposites, including the Social Democratic Party (SPD), for the benefit of the country.

Stresemann’s short stint as chancellor (1923) was doomed by the ongoing Ruhr occupation, rampant hyperinflation and a fragile government coalition. It was as foreign minister, however, that he would make his mark on the Weimar Republic.

Stresemann served almost six full years (1923-29) as the Republic’s foreign minister. Recognising that Germany could not recover without international support, he worked to restore and rebuild diplomatic ties, renegotiate the reparations debt and secure foreign loans.

Among Stresemann’s achievements as foreign minister were the negotiation of the Dawes Plan (1924), the Locarno Treaties (1925), a treaty with the Soviet Union and Germany’s admission as a member-state of the League of Nations (both in 1926). Stresemann and French statesman Aristotle Briand shared the Nobel Peace Prize for the Locarno agreements, which reconciled Franco-German relations.

Stresemann was less conciliatory when it came to eastern Europe, particularly Poland. Like other German nationalists, he rejected the idea of Polish sovereignty and sought the reclamation of German territories surrendered to Poland after World War I.

Stresemann’s premature death in 1929, at the age of 51, robbed Weimar Germany of its most effective statesman, at a time when he was needed most.