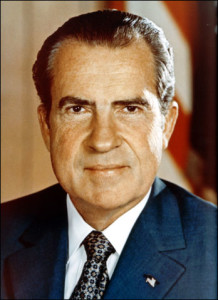 Richard Nixon (1913-1994) was president of the United States from January 1969 until his resignation in August 1974. Nixon’s administration initiated the withdrawal of American combat forces from Vietnam, however, several of its other policies proved controversial.

Richard Milhouse Nixon was born into an impoverished family in Orange County, California. His father was a struggling lemon farmer, his mother a gentle but disciplined Quaker.

The young Nixon excelled at high school and was offered a scholarship to attend Harvard but he remained in California to support his parents. He attended Whittier College before graduating in law from Duke University.

Nixon served as a junior officer in the United States Navy during World War II. In 1946 he was elected to the US Congress, where he served in both the House of Representatives and the Senate for six years.

In 1952, Nixon was elected vice president under Dwight D. Eisenhower. At age 40, he was the second youngest vice president in US history. Nixon also assumed more responsibilities than previous vice presidents, attending cabinet and security meetings, representing the US on overseas trips and speaking publicly on foreign policy. One of Nixon’s most famous exploits as vice president was his official visit to Moscow and his ‘kitchen debate’ with Soviet leader Nikita Khrushchev, where both leaders debated the merits of capitalism and communism.

After two terms as vice-president, Nixon seemed well prepared for a run at the White House. He entered the November 1960 presidential election as the favourite but was narrowly defeated by the Democrat candidate John F. Kennedy, a more charismatic and polished media performer.

After losing a 1962 tilt for the governorship of California, Nixon kept a low political profile for several years. In 1968, he reentered politics, declaring himself a candidate for that year’s presidential elections.

Nixon was elected president in November 1968, at a time of great disillusionment with the White House and its handling of the conflict in Vietnam.

The Vietnam War came to dominate Nixon’s presidency. With the US losing around 300 soldiers a week in Vietnam, and the enemy showing no signs of weakening, Nixon concluded that the war could not be won. Instead, he looked for a compromise or agreement that would allow an ‘honourable’ US withdrawal.

In the first months of his presidency, Nixon offered to suspend American bombing if Hanoi agreed to unconditional peace talks. Behind the scenes, however, the president had authorised Operation Menu, an intensification of bombing missions over Cambodia and Laos. This expansion of the war was concealed from the American public but leaked and exposed by the press in May 1969. This shattered Nixon’s attempts to paint himself as a peace seeker.

In November 1969 Nixon, in a televised speech, announced a new policy called Vietnamisation. It would involve a rolling schedule of American troop withdrawals from Vietnam, as their combat roles were gradually filled by South Vietnamese forces (ARVN).

The Vietnamisation policy made some progress and allowed for the scheduled withdrawal of 150,000 US soldiers by late 1971. Nixon continued to expand the war beyond Vietnam, however, ordering incursions into Cambodia (April 1970) and Laos (January 1971).

Meanwhile, Nixon continued to use aerial bombing to force Hanoi to the peace table. He also visited China, met with communist leader Mao Zedong and reestablished diplomatic ties with Beijing – yet still the North Vietnamese refused to negotiate. This changed in late 1972 when Nixon’s advisor, Henry Kissinger, managed to negotiate a secret peace deal with Le Duc Tho.

Nixon was reelected in November 1972, on the back of this breakthrough in negotiations. Privately, Nixon was sceptical about the Paris peace accords (signed January 1973). He believed that Hanoi would eventually recommence hostilities, requiring the US to recommit troops to defend South Vietnam.

Nixon continued to send money, supplies and military aid to Saigon, but in mid-1973 a hostile Congress legislated to prevent further military intervention (the Case-Church amendment). Economic crises in 1973 pushed attention back onto domestic policies, while the growing Watergate affair uncovered abuses of power and coverups by Nixon and his staff.

Watergate ultimately led to moves for Nixon’s impeachment and his resignation in August 1974. He was controversially pardoned by Gerald Ford before slipping into retirement and penning several books. In one of them, No More Vietnams (1985), Nixon defended his management of the war and blamed Congress for rendering the White House impotent, thus opening the door for a North Vietnamese victory.