Le Duc Tho (1911-1990) was a Vietnamese communist revolutionary, a senior figure in the Lao Dong party and, in 1972-73, an influential peace negotiator. 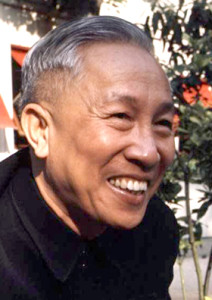 Le Duc Tho was born Phan Dinh Khai near the Red River delta, northern Vietnam. His family was not wealthy, however, Tho had an uncle who had served as provincial governor. The teenaged Tho became a postal worker while becoming involved in radical politics.

In 1930, he became a founding member of the Indochinese Communist Party (ICP). He spent most of the next 15 years in French colonial prisons for his political activism.

By the outbreak of the First Indochina War, Tho was an influential leader in the revolutionary Viet Minh. In the mid-1950s, he began providing strategy and direction for the communist insurgency in southern Vietnam (later to become the Viet Cong). Tho’s successes and friendship with Le Duan saw him rise to prominence in the Lao Dong party.

In mid-1968, Le Duc Tho travelled to Paris as the de facto head of North Vietnam’s negotiating team. Tho proved a shrewd and obstinate negotiator, refusing to make concessions or allowances despite pressure from the Americans.

In February 1970, Tho began a series of secret meetings with US security advisor Henry Kissinger.  Over the next two years, away from the oversight of the press and their own governments, Tho and Kissinger formed an agreement that contained compromises and concessions from both sides. This agreement became the Paris peace accords, signed in January 1973.

Both Kissinger and Tho were hailed as negotiators and ‘peacemakers’, somewhat ironically given their backgrounds. Both men were jointly awarded the Nobel Peace Prize for 1973, however, Tho refused to accept the award while Vietnam remained at war.

Le Duc Tho returned to Vietnam and helped lead the final North Vietnamese offensive against Saigon in 1975. After reunification, he held important administrative positions in the government and the Lao Dong party. He retired from politics in 1986 and died in Hanoi four years later.

Citation information
Title: “Le Duc Tho”
Authors: Jennifer Llewellyn, Jim Southey, Steve Thompson
Publisher: Alpha History
URL: https://alphahistory.com/vietnamwar/le-duc-tho/
Date published: March 2, 2018
Date accessed: August 18, 2022
Copyright: The content on this page may not be republished without our express permission. For more information on usage, please refer to our Terms of Use.