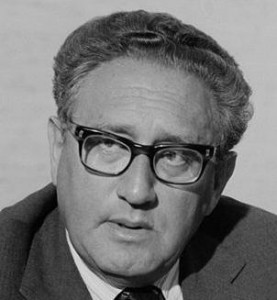 Henry Kissinger (1923- ) was a national security advisor to US president Richard Nixon. He was a controversial figure who was involved in both expanding the Vietnam War and bringing it to an end.

Born in Germany to a Jewish family, Kissinger’s parents emigrated to the US in 1938. He was drafted into the US Army five years later and posted to Europe. Despite holding a low rank due to his foreign birth and modest education, Kissinger excelled as an administrator in post-war Germany.

After the war, Kissinger studied at Harvard, completing a doctorate in history and politics in 1954. He joined the teaching staff at Harvard for more than a decade. During this period he also provided advice on foreign policy and established contacts with influential political figures in the Republican party. Kissinger visited Vietnam twice during the mid-1960s, concluding that an American military victory in Vietnam was unlikely.

In 1967-68, Kissinger became close to Republican presidential candidate Richard Nixon. After Nixon’s election in November 1968, Kissinger was appointed to the White House staff. He became the president’s most trusted advisor on foreign affairs generally and the Vietnam War specifically.

Kissinger’s first significant move was to approach the North Vietnamese government seeking terms for peace. When Hanoi demanded the withdrawal of all US troops from Vietnam, Kissinger advised Nixon to intensify the US bombing of North Vietnam. He also recommended the secret bombing of communist bases in Cambodia and, later, US and South Vietnamese troop incursions there. Kissinger was opposed to Nixon’s policy of Vietnamisation, believing that it would embolden Hanoi and make a favourable peace settlement more difficult to achieve.

Kissinger is best remembered for his involvement in peace talks with the North Vietnamese. These did not bear fruit until 1972, after Kissinger had made secret overtures to China (where he visited in July 1971) and the Soviet Union.

For a time, Kissinger was hailed as a peacemaker, a brilliant negotiator who had secured an end to the Vietnam War. In December 1972 TIME magazine declared him its “Man of the Year”. Kissinger was appointed Secretary of State (September 1973) and the following month was awarded the Nobel Peace Prize, along with Le Duc Tho.

Not all were impressed by these accolades, however. Many saw Kissinger as a key figure in prolonging the Vietnam War, expanding it into Cambodia and contributing to the rise of the Khmer Rouge there.