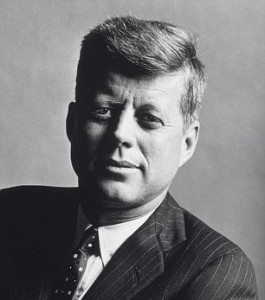 John F. Kennedy (1917-1963) was the 35th president of the United States, holding office from January 1961 to his assassination in November 1963. His presidency was short but it spanned a critical period, both in Vietnam and the formulation of US policy.

Kennedy was a member of the Massachusetts political elite, the second son of Joseph Kennedy, a wealthy businessman and future US ambassador to Britain. Kennedy was educated in private schools, then at Harvard, where he majored in history and politics. During childhood, he was plagued with illness and back pain and hospitalised several times.

In 1941, John F. Kennedy joined the US Naval Reserve and received a lieutenant’s commission. During World War II, he commanded several patrol boats in the Pacific theatre. He was decorated for his bravery and leadership when one of these boats, PT-109, was sunk by a Japanese destroyer.

After his war service, Kennedy entered politics as a Democrat. He gained election to the United States Senate in November 1952. Despite his relative inexperience, Kennedy stood for the presidency in 1960. He ran against the incumbent vice president, Richard Nixon, and won the presidency in one of the closest results in US electoral history.

Like his predecessors, Kennedy was a Domino Theory advocate who wanted to halt the spread of communism in Europe and Asia. In his inauguration speech (January 1961), Kennedy promised that America would “pay any price, bear any burden, meet any hardship, support any friend, oppose any foe to assure the survival and the success of liberty.” Despite this, Kennedy was also a political realist who understood the complexities of foreign policy and the risks of making hasty decisions. He was concerned that the US could easily be drawn into a wider conflict, possibly leading to nuclear war.

With regard to south-east Asia, Kennedy’s initial concern was with Laos which by late 1960 had fallen into a state of civil war. He chose not to send US troops or planes into Laos, despite Soviet interference there. Taking advice from members of his inner circle, such as the anti-communist Dean Rusk, the president came to see Vietnam as the last line of defence, the place in which the US must halt communist expansion in Asia.

John F. Kennedy supported the development of a free and strong South Vietnam, a sovereign state capable of defending itself against communist incursions. In 1961, he ordered a series of fact-finding missions to Vietnam, followed by an increase in both military aid and American military advisors to Saigon. His administration also devised and funded schemes like the Strategic Hamlets program, designed to make the South Vietnamese more self-sufficient and capable of withstanding communist aggression.

By late 1962, the US had almost 12,000 military personnel in Vietnam while the Ngo Dinh Diem regime was coming under criticism for its corruption, nepotism and brutality. Diem’s anti-Buddhist campaign in 1963 proved last straw for Kennedy. In October 1963, the president wound back economic aid to Saigon. The following month the White House gave tacit support for a military coup, which led to the overthrow and execution of Diem in November 1963. Kennedy himself was shot to death in Dallas, Texas, just three weeks later.

Historians have long debated Kennedy’s role in the unfolding Vietnam War. Many, including his defence secretary Robert McNamara and his brother Robert, suggested Kennedy would never have committed combat troops to Vietnam. Others have blamed Kennedy for making commitments to South Vietnam that later presidents were forced to honour.