Pham Van Dong (1906-2000) was a communist leader and prime minister of North Vietnam and Vietnam for more than 30 years. 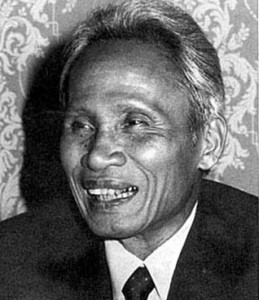 Pham Van Dong was born into an affluent family in Quang Ngai province; his father had been a court secretary to the Nguyen emperors.  Dong was educated in Hue, where his classmates included Vo Nguyen Giap and Ngo Dinh Diem. He then completed a law degree at the University of Hanoi, where he became involved in radical student politics.

In 1926, Pham journeyed to China to join the Revolutionary Youth League, learn communist theory and study at the Huangpu military academy. It was in China where he met Ho Chi Minh, with whom he remained closely aligned.

Dong returned to Vietnam in 1929 to recruit for revolutionary groups. He was arrested by the French and imprisoned on Con Son prison island for several years until granted an amnesty in 1937.

Founding member of the Viet Minh

In 1939, Pham Van Dong and Vo Nguyen Giap were sent to China to study guerrilla warfare. They returned to China with Ho Chi Minh to establish the Viet Minh and begin the struggle for Vietnamese independence, in which Dong played an important role.

Dong attended the Geneva conference (1954) but was bitterly disappointed with its outcomes. In September 1955, he became prime minister of North Vietnam, a position he would retain after reunification and until 1986.

After Ho Chi Minh’s death in 1969 Dong became Vietnam’s most significant communist leader. He took control of the war in the south, manipulating the Americans by feeding their anti-war movement while providing Washington with opportunities for a withdrawal. Le Duc Tho’s secret negotiations with Henry Kissinger were endorsed and probably directed by Pham Van Dong.

Dong remained as prime minister after the unification of Vietnam in July 1976. His government wrestled with a number of problems, including economic shortages, land reform, political opposition and international exclusion. The emergence of younger reform-minded leaders in the mid-1980s eventually forced Dong’s resignation. He became an advisor to the Communist Party until his eyesight deteriorated, leaving him blind.

Pham Van Dong died in April 2000, aged 94. Like Ho Chi Minh, he was hailed as both a visionary and an incorruptible figurehead of the Communist Party.