Vo Nguyen Giap (1911-2013) was a leading Vietnamese military commander and strategist. His tactics were instrumental in both the Viet Minh’s victory over the French (1946-54) and North Vietnam’s victory in 1975. 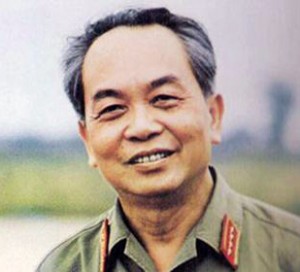 Giap was born into an affluent peasant family in Quang Ninh province, just north of Haiphong. His father had participated in anti-French uprisings and died in a French prison when Giap was a boy.

Giap was sent to a French boarding school in Hue, where he shared classes with Ngo Dinh Diem. Giap was a disruptive and politically active student, however, and was expelled two years later.

As a teenager, he became involved in left-wing revolutionary groups and spent a year in a French prison at Lao Bao. After his release in 1931, Giap joined the Indochinese Communist Party (ICP). In the mid-1930s, Giap studied politics at the University of Hanoi before taking up employment as a history teacher.

During World War II, Giap joined other insurgents to fight against the Japanese and Vichy French in northern Vietnam. He travelled to China, met Ho Chi Minh and became a member of the Viet Minh.

During the war, Giap led a Viet Minh unit responsible for recruiting, training and discipline. He became a keen student of war and revolution, reading about leaders as diverse as Sun Tzu, George Washington and Vladimir Lenin.

Giap’s reputation for tactics and strategy saw him given a ministership in Ho Chi Minh’s government in late 1945. When the First Indochinese War erupted in 1946, Giap returned to a military role, leading an army of more than a quarter-million men. Employing the guerrilla tactics of China’s Mao Zedong, Giap’s army won control of large areas of northern and central Vietnam. His tactics and intrepid planning led to the French defeat at Dien Bien Phu in May 1954.

Vo Nguyen Giap was instrumental in the expansion and development of the North Vietnamese Army (NVA) during the Vietnam War. His goal was to prolong the war for as long as possible, inflicting casualties on American personnel and physical damage on the US government.

Tactically, Giap did not believe the NVA could match the Americans in conventional warfare. As a consequence he did not support large-scale operations such as the Tet Offensive. Giap later planned the NVA’s 1972 Easter Offensive, on the orders of North Vietnam’s Politburo, though he doubted it would succeed.