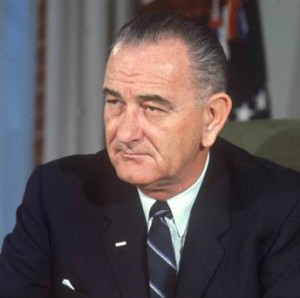 Lyndon Johnson (1908-1973) was vice president of the United States under John F. Kennedy (1961-1963) and became the 36th president after Kennedy’s assassination. Johnson was chiefly responsible for America’s military escalation in Vietnam during the mid-1960s.

Born in rural Texas, Johnson trained as a teacher then worked for a time in a one-room schoolhouse. These experiences left him with an interest in social reform, particularly in the areas of poverty, education and racial equality. Involved in student politics, Johnson ran as a Democrat for the US House of Representatives, winning office in 1937.

During his time in Congress, Johnson became a champion of domestic reform. He hoped to forge what he later called the “Great Society”, where governments provided education, healthcare and support to the poor and marginalised. This was typified by two Civil Rights Acts, passed in 1957 and 1960, both championed by Johnson.

Like the three chief executives before him, Johnson was a strong advocate for containment and the Domino Theory. He was not well versed in foreign policy, however, particularly with regard to Asia. Instead, Johnson relied heavily on advice from his military chiefs and White House staff, most of whom advocated American military intervention in Vietnam. Johnson came to see Vietnam as a national challenge; withdrawal and the loss of South Vietnam would undermine American power, authority and credibility.

During 1964, Johnson strengthened America’s military presence in South Vietnam and appointed General William Westmoreland and Maxwell Taylor to significant roles there. The president privately consented to military action against North Vietnam and the Viet Cong, though he preferred to wait until after the 1964 presidential election.

In late 1964, Johnson used the Gulf of Tonkin incident (August 1964) as a pretext for American military intervention. Johnson sought and obtained a sweeping resolution from Congress, which became his ‘blank cheque’ for waging war in Vietnam. American air strikes against North Vietnam were expanded and intensified, followed by the first landings of US combat troops in March 1965.

Under Johnson, America’s military commitment to Vietnam steadily increased; so too did the numbers of American deaths and casualties. Johnson himself spoke optimistically of the war in Vietnam, telling the American people that progress had been made and that the enemy was weakening. Privately, however, he often expressed frustrations, doubts and misgivings about the Vietnam conflict.

Johnson made numerous attempts to build a working peace with Hanoi. Some of these attempts were made privately and others publicly; a pause or cessation of US bombing was often held out as an incentive to Hanoi.

By 1968, the Johnson administration was approaching a state of crisis. American military strategy in Vietnam had failed to achieve much except thousands of US casualties. The war crippled Johnson’s program of social reforms and caused the budget deficit to almost triple in the space of a year.

The Tet Offensive (January 1968) prompted Johnson to order an analysis and reevaluation of the situation in Vietnam. This was followed by a shift in policy and the replacement of Westmoreland as the commander of US forces in South Vietnam.

Johnson’s approval rating had also declined rapidly through 1967 and it appeared he may lose the Democratic nomination to Robert F. Kennedy. On March 31st 1968, Johnson addressed the nation, declaring that bombing runs against North Vietnam would be suspended and that he would not seek or accept reelection as president.

Johnson retired in January 1969. His memoirs and subsequent interviews revealed a man still troubled by the Vietnam War and how it was handled. Lyndon Johnson died at his Texas home in January 1973.