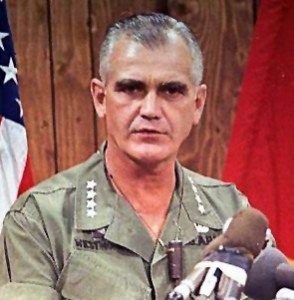 Westmoreland was born into an affluent middle-class family in South Carolina, his father a textile plant manager. As a teenager, he was heavily involved in the Boy Scouts movement.

In 1936, he graduated with honours from West Point. He commanded an artillery battery in World War II, seeing action in Europe and northern Africa and reaching the rank of colonel. After this Westmoreland served in the Korean War and returned to the US, where he held numerous staff positions. By 1960 he was the US Army’s youngest major general and was serving as superintendent at West Point.

In January 1964, Westmoreland arrived in Vietnam as deputy commander of Military Assistance Command, Vietnam (MACV). He assumed command of MACV in June 1964 and was promoted to full general two months later.

Westmoreland was ambitious and eager to produce results in Vietnam. Now responsible for strategy, the general pushed for a revision of the initial terms of engagement. Instead of supporting South Vietnamese Army (ARVN) and defending towns and cities, Westmoreland wanted to use American combat soldiers in more aggressive operations against the Viet Cong.

Given more license in late 1965, Westmoreland authorised his troops to conduct ‘search and destroy’ operations, sending large contingents of US troops into the field to locate and eliminate communist forces.

As the war expanded and escalated, Westmoreland requested more troops from Washington. During his command of MACV, the number of American troops in Vietnam increased from around 77,000 to more than a half million.

Westmoreland was also a capable media performer. He appeared regularly before journalists to provide updates on the progress of the war. In late 1967 he made optimistic predictions that the enemy was depleted and “the end [of the war] was in sight”. These predictions were proved wrong by the Tet Offensive of January-February 1968.

Several months later, Westmoreland was posted back to Washington and replaced by General Creighton Abrams. He served as US Army chief of staff until 1972.

In retirement, Westmoreland was a resolute defender of both the Vietnam War and his own service. He died in July 2005, aged 91.