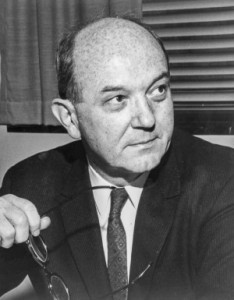 Rusk was born in rural Georgia, attended college in North Carolina and studied at Oxford as a Rhodes scholar. During World War II he served in the Army Reserve as an intelligence officer, working primarily in Asia and ending the war as a colonel.

In 1946, Rusk joined the State Department and held a number of diplomatic and advisory posts. As assistant secretary for Asian affairs, he played an important role in the Korean War. In 1961, the incoming president John F. Kennedy named Rusk as his Secretary of State.

Kennedy’s appointment of Rusk, ahead of some more obvious candidates, surprised many. Rusk was intelligent, analytical and experienced in the Asian hemisphere – but he was dry and quietly spoken, more a behind-the-scenes operator than a policymaker.

Despite his reserved nature, Rusk was a hardline anti-communist. He strongly believed in containment and the Truman Doctrine, arguing that America had a responsibility to support friendly nations under threat from communism. Rusk also argued against making concessions, offering compromises or negotiating with the leaders of North Vietnam (he considered them dishonest, treacherous and mere puppets of communist China).

With regard to South Vietnam, Rusk – who had wartime experience with Asian regimes – harboured doubts about Ngo Dinh Diem and his government. Rusk was not part of Kennedy’s inner circle of advisors, however, so he had little impact on the president’s decision making with regard to Vietnam. He became more prominent under Lyndon Johnson, supporting the Pentagon’s recommendations for greater US military involvement in Vietnam.

Rusk left office with Johnson in January 1969, making him the second longest serving Secretary of State in US history. After retirement, he taught international law at the University of Georgia. He released his memoirs, As I Saw It, in 1990 and died four years later.