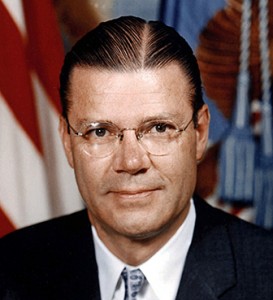 Robert McNamara (1916-2009) was the United States secretary of defence between January 1961 and February 1968. US military involvement in Vietnam increased significantly during his tenure at the Department of Defence.

McNamara was a native of California, born in San Francisco and educated at Berkeley. He obtained a master’s degree in business from Harvard and served in World War II in an administrative capacity. After the war McNamara joined Ford as an executive, rising to the presidency of the company in 1960.

In late 1960, president-elect John F. Kennedy recruited McNamara as his defence secretary. It was a surprising appointment, given McNamara’s youth (he was just 44) and his lack of experience in both government and the military. McNamara was an astute manager and administrator, however, and he quickly became a trusted member of Kennedy’s inner circle.

As defence secretary, McNamara overhauled the US military’s budgeting, spending and planning systems. He also reorientated the military focus back onto conventional forces and implemented tighter controls on nuclear weapons.

With regard to Indochina, McNamara adopted a hawkish position, recommending US policies and aid to defend South Vietnam from communist aggression and infiltration. In September 1963, McNamara visited South Vietnam on a fact-finding mission. While in Vietnam, he became more aware of the complexities and considerable difficulties, leading to a softening of his position. Numbers of US military advisors increased from 900 to 16,000 under McNamara’s oversight.

Through the mid-1960s, McNamara recommended greater US involvement in Vietnam, arguing that North Vietnamese Army (NVA) and Viet Cong numbers were limited and unable to sustain regular casualties.

In early 1966, McNamara recommended the deployment of an additional 200,000 men to press home the advantage. By the middle of 1967, however, McNamara determination was wavering and he was providing president Lyndon Johnson with uncertain and even contradictory advice.

McNamara resigned as defence secretary in November 1967. It is uncertain whether he did so at Johnson’s request or on his own initiative.

Before his death in 2009, McNamara spoke often about the Vietnam War, its un-winnability and his own errors in judgement and decision making. Much of this critical reflection can be found in McNamara’s 1995 memoir (In Retrospect) and his appearance on a 2003 documentary (The Fog of War).