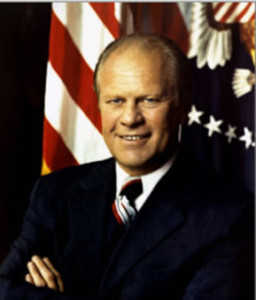 Gerald Ford (1913-2006) served as vice president of the United States under Richard Nixon, then as president following Nixon’s resignation in August 1974. He served as president for less than two and a half years, overseeing defeat and US withdrawal in Vietnam.

Ford was born Leslie Lynch King in Nebraska, the son of a wool merchant. His mother left his father, who had a history of domestic violence, shortly after Ford’s birth. As an infant, Ford lived with his maternal grandparents in Michigan, before his mother remarried in 1916.

As a child and a teenager, Ford was heavily involved in the Boy Scouts, rising to the highest rank of Eagle Scout. He was also a successful footballer and did occasional work as a male model. Ford completed an arts degree at the University of Michigan and a law degree at Yale. He served in the United States Navy during World War II, rising to the rank of lieutenant commander.

Ford was elected to the US House of Representatives in 1949. He served in the Congress for 24 years, eight of them as House minority leader for the Republicans.

As a Congressman, Ford gave hawkish support to American military involvement in Vietnam. He was frequently critical of president Lyndon Johnson, accusing him first of not committing enough resources to Vietnam, then of lacking a coherent military strategy there.

In October 1973, Nixon’s vice president, Spiro Agnew, resigned due to a bribery scandal and Ford was appointed as his replacement. Ford became president just 10 months later, following Nixon’s resignation amid the Watergate scandal. A month later, Ford granted Nixon a full pardon, a move that generated considerable controversy and rumours of a deal between the two.

A month after taking office Ford issued a presidential proclamation, offering a conditional pardon to all ‘draft dodgers’ and military deserters.

In late January 1975, the new president requested packages of military aid for South Vietnam ($US300 million) and Cambodia ($US222 million), both of which were battling full scale communist invasions. Ford’s request for aid was voted down by Congress.

As communist forces closed in on the South Vietnamese and Cambodian governments, Ford ignored the advice of Henry Kissinger and military chiefs and took no significant military action. In April 1975, he ordered the evacuation of American personnel and friendly locals from both Saigon and Phnom Penh.  The evacuation, Ford told the American people, “closed a chapter in the American experience”.

Ford spent 1976 wrestling with domestic and economic problems, before narrowly losing the November 1976 election to Jimmy Carter. Most historians agree that Ford, while widely respected as a decent man, was too closely associated with Nixon and the defeat in Vietnam to win a second term.

Ford went into retirement after his defeat and died in California in 2006, aged 93.