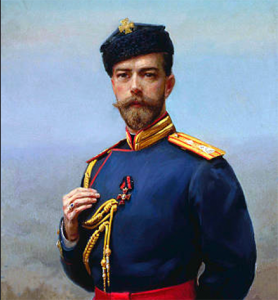 The violence and economic disruption of the 1905 Revolution forced Tsar Nicholas II to issue the October Manifesto and agree to the convocation of a State Duma. An autocrat by inclination, Nicholas agreed to this reluctantly. He distrusted democratic forms of government, had no regard for elected legislatures or liberal politicians and no interest in sharing power with them. The following extracts are taken from the Tsar’s frequent letters to his mother, the Dowager Empress, between January 1906 and March 1907. They show Nicholas’ contempt for the Duma, his former chief minister Sergei Witte and the liberals of the Kadet party. They also contain glimpses of the Tsar’s latent anti-Semitism:

“In Finland, the socialists have raised their heads again since the October strike and the Senate does not like the situation… As for Witte, he has radically changed his views – now he wants to hang and shoot everybody. I have never seen such a chameleon of a man. That is the reason why no-one believes in him any more. He is absolutely discredited with everybody, except perhaps the Jews abroad…”

“I feel very tired in mind but fit in body. I have had to see a number of people. Yesterday, among others, Lvov and Guchkov. Stolypin offered both of them portfolios but they refused… They hold their own convictions in higher esteem than patriotism and seem to be guided by false modesty, on one hand, and fear of committing themselves on the other. We will manage without them…”

“The country seems to be becoming sober again. There is a healthy reaction in favour of good order, and disturbers of the peace come in for criticism. Individual plots by anarchists are still to be expected, of course, but they have happened before and will not lead anywhere. The courts-martial and the severe punishment they inflict for looting, robbery and murder are doing some good…

If only all the authorities would do their duty honestly and without fear! In this lies the guarantee of peace. How shameful is the behaviour of [Kadet Duma members] Dolgoroukys, Shakhovkoys and company… Everybody here in Russia laughs at them.”

“To my great regret, Count Witte has returned from abroad. It would have been more sensible of him and convenient for me if he had stayed away. As soon as he was back a peculiar atmosphere full of all sorts of rumours and gossip began to form round him. Some of the wretched papers are already beginning to say he is coming back to power, that only he can save the country.

Evidently the Jewish clique is starting to sow sedition again, trying to undo all the good which my own efforts and Stolypin’s efforts for peace have been able to achieve. As long as I live, I will never trust that man again with the smallest thing. I had quite enough of last year’s experiment. It is still like a nightmare to me.”

“For the time being, things here are comparatively quiet. As of course you know already, the [Second] Duma has opened its session. What a colossal blunder it was of the Left not to rise when the Right cheered. Since then, I have been continually receiving messages from the [ultra-conservative group] True Russian Men, expressing their indignation at such disrespectful behaviour in the Duma.

This institution is still busy with preliminary questions… Tomorrow or perhaps on Saturday, Stolypin will make his statement. After that it will soon be evident how far the Duma intends to get down to serious work, or to squander its time and small prestige in useless chatter and abuse. We shall see what happens.”

“The [tsarist] government’s prestige has risen very high owing to Stolypin’s and also Kokovstov’s speeches. Nobody in the Duma can stand up to them. They speak so cleverly and with such presence of mind and, what is more important, they say nothing but the truth.

All would be well if everything said in the Duma remained within its walls. Every word spoken, however, comes out in the next day’s papers, which are avidly read by everybody. In many places the population is getting restive again. They are beginning to talk about the land once more and are waiting to see what the Duma is going to say on the question. I am getting telegrams from everywhere, petitioning me to order a dissolution, but it is too early for that. One must let them do something manifestly stupid or mean, and then – slap! And they [the Duma] are gone!”