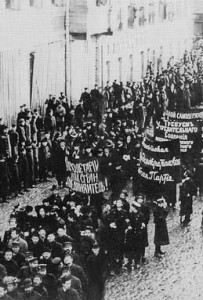 The shooting of protesting factory workers in St Petersburg in January 1905 sparked what became known as the 1905 Revolution, the 20th century’s first major challenge to tsarist autocracy. For several months, tsarism found itself under siege and under pressure to introduce liberal social and political reforms.

Unlike some other revolutions, the 1905 Revolution was spontaneous, uncoordinated and lacked a single guiding movement or objective. It was a series of revolutionary actions by several unconnected groups and classes, each with their own political motives and their own set of grievances.

Though the 1905 Revolution began in the cities, it quickly spread across the empire. It included mutinies in remote naval bases, peasant uprisings in the provinces and worker unrest in Siberia.

By mid-1905, this revolutionary fervour had reached such intensity that the overthrow of tsarism seemed more likely than not. Yet tsarism was able to survive, partly due to promises of liberal reform and partly because the revolutionary forces lacked leadership, cohesion and a common goal.

Nicholas II was not in the Winter Palace when the Putilov workers were shot on the quadrangle outside. Despite this, he supported the actions of his troops and refused to sanction them. This intensified anti-tsarist sentiment and fuelled more unrest, with many condemning the tsar as ‘Bloody Nicholas’.

There were significant concerns about the personal safety of the royal family. These fears were justified on February 17th when Grand Duke Sergei Alexandrovich, the tsar’s uncle and brother-in-law and the former governor of Moscow, was assassinated in the Kremlin. The murder was carried out by a member of the Socialist-Revolutionary (SR) party’s terrorist arm. A powerful bomb was tossed into Alexandrovich’s lap and he was literally blown to pieces.

Nicholas immediately cancelled almost all of his public appearances. The royal family would remain in the comparative safety of their palaces for most of 1905.

General strikes were the more immediate response to ‘Bloody Sunday’. Thousands of workers in Russian cities elected to cease work as a show of solidarity with their murdered comrades in St Petersburg. Within a month, an estimated 800,000 industrial workers were striking across Russia, around half of these in St Petersburg alone.

These strikes required coordination and leadership, most of which came from factory committees or influential individuals.

As the revolution dragged on through the summer, there were calls for a council of delegates to represent all industrial workers. This body, the St Petersburg Soviet, was formed in October 1905. It contained about 500 delegates elected by 200,000 workers in almost a hundred different factories. The Mensheviks were the dominant political group in this new body, though the Bolsheviks and SRs were also well represented.

Another worrying sign for tsarism was a spate of mutinies that erupted in military units through the middle and end of 1905. The most famous of these occurred aboard the battleship Potemkin on the Black Sea.

The Potemkin mutiny was triggered by officers with a liking for corporal punishment and the serving of maggot-ridden meat to mistreated sailors. In June 1905 the sailors, inspired by civilian uprisings in the cities, rebelled and killed or expelled the ship’s officers. Now in command of the Potemkin, they sailed it first to Odessa (by then under a general strike) and then to Romania, where most of them disembarked.

Another mutiny broke at in November at the naval depot in Sevastopol. There, several thousand sailors formed their own soviet and demanded the abolition of tsarism, a constituent assembly and improvements to their conditions.

The tsar reacted to the events of 1905 by promising reforms – but he equivocated about what they should be.

A day after the assassination of Sergei Alexandrovich, Nicholas announced that his ministers would investigate plans for a representative Duma (assembly). This task was largely left to Alexander Bulygin, the tsar’s newly appointed interior minister.

Bulygin was given the difficult task of convening an elected Duma that did not weaken the Tsar’s autocratic power. The Bulygin plan promised an assembly of “the most trustworthy men, having the confidence of the people and elected by them, to undertake the preliminary examination and consideration of legislative measures”. Bulygin’s memo also discussed language rights for the Poles and a reduction in the peasants’ redemption payments.

Bulygin’s vague proposal failed to gain support and was strongly criticised by socialists and some liberals. It also failed to ease unrest and strikes in Russian cities.

The tension only eased when Sergei Witte returned in October, after finalising peace negotiations with the Japanese. He fired off a memo to Nicholas II, urging the tsar to approve the immediate election of a representative Duma.

Nicholas’ response, explained here in a letter to his mother, reveals not just his own indecision but the importance of Witte in bringing about some kind of solution:

“Through all these horrible days, I constantly met Witte. We very often met in the early morning to part only in the evening when night fell. There were only two ways open; to find an energetic soldier and crush the rebellion by sheer force. That would mean rivers of blood, and in the end, we would be where we had started. The other way out would be to give to the people their civil rights, freedom of speech and press, also to have laws confirmed by a State Duma – that, of course, would be a constitution. Witte defends this very energetically. Almost everybody I had an opportunity of consulting, is of the same opinion. Witte put it quite clearly to me that he would accept the Presidency of the Council of Ministers only on the condition that his program was agreed to, and his actions not interfered with.”

A historian’s view:
“1905 was a notable event in Trotsky’s life for other reasons, in that it offered a first opportunity of participating in an actual revolutionary situation. In 1905 he acted as a revolutionary journalist and orator, joined the St Petersburg Soviet and, briefly (for one week) became one of three co-chairmen of the Soviet’s Executive Committee. During the trial of the Soviet leaders, he made a characteristic denouncement of tsarism from the witness stand… Trotsky emerged from 1905 with a reputation of a man of action and a revolutionary of great courage and daring.”
Ian D. Thatcher

1. The 1905 Revolution was not a coordinated revolution with a single leader – but a fairly spontaneous series of anti-tsarist strikes, protests and actions.

2. Triggered by the January shootings of protesting workers in St Petersburg, the 1905 Revolution began as a series of general strikes imposed by industrial workers.

3. The 1905 Revolution was also marked by political violence against tsarist officials, such as the February assassination of the tsar’s uncle, Grand Duke Sergei.

4. Other features of the 1905 Revolution were military mutinies, such as that aboard the ‘Potemkin’, and the formation of workers’ councils called soviets.

5. The tsar responded to the threats of 1905 by promising a constitution and a representative Duma – but neither was done promptly or sincerely.

Citation information
Title: “The 1905 Revolution”
Authors: Jennifer Llewellyn, Michael McConnell, Steve Thompson
Publisher: Alpha History
URL: https://alphahistory.com/russianrevolution/1905-revolution/
Date published: July 25, 2019
Date accessed: January 14, 2022
Copyright: The content on this page may not be republished without our express permission. For more information on usage, please refer to our Terms of Use.