Lenny Murphy (1952-82) was a Loyalist paramilitary volunteer and leader of a notorious Belfast death squad, the Shankill Butchers. 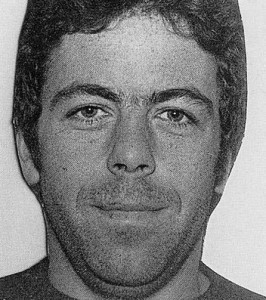 Born Hugh Leonard Murphy in the Protestant stronghold of Shankill Road, Murphy was the youngest son of a dockworker. As a child, he was frequently in trouble for bullying, violence and petty crime. Murphy dropped out of high school at 16 and joined the Ulster Volunteer Force (UVF).

The outbreak of the Troubles in 1969 allowed Murphy to indulge his main interests: robbery, violence and a pathological hatred of Catholics. Still a teenager, Murphy participated in rioting, street violence and attacks on Catholic civilians and homes. He also attended the trials of paramilitary volunteers, studying their methods and those of police and security forces.

Murphy’s first recorded murder was in September 1972 when he shot a Protestant accused of selling arms to the Provisional IRA. Murphy was acquitted after eyewitnesses were intimidated and another witness, Murphy’s accomplice in the killing, was mysteriously poisoned. He was imprisoned on other charges then interned for three years.

After his release in May 1975, Murphy and his older brother John assembled a Loyalist vigilante group, recruiting UVF members with a reputation for thuggery. This group, which met in Shankill Road’s Brown Bear Pub, became known as the Shankill Butchers. They operated independently of UVF commanders, choosing their own targets and using their own methods.

The Shankill Butchers carried out their first killings in October 1975, murdering four Catholics while robbing a liquor store. Over the next seven years, the group killed at least 23 people. Almost all their victims were Catholic civilians with no connection to the IRA.

Murphy was arrested on firearms charges in March 1976 and sentenced to 12 years in prison. He was released in July 1982 and returned to political and criminal killings. In October, his men hijacked a taxi and picked up a Catholic civilian, Joseph Donegan. He was taken to Murphy’s house and sadistically tortured, then beaten to death with a shovel.

The killing of Donegan shocked even hardline UVF volunteers, who may have passed information about Murphy to the Provisional IRA. In November 1982, an IRA team ambushed and killed Murphy in a Protestant area of Belfast. In a statement, the Provisional IRA called Murphy a “master butcher” who was responsible for “sectarian slaughter” against Nationalists.

Despite his controversial involvement in the UVF, Murphy was given a large funeral and commemorated as a Loyalist volunteer. His brother John and other gang members were never charged and faded into civilian life after Murphy’s assassination. The 1998 film Resurrection Man was inspired by Murphy and the Shankill Butchers.