Sir Jeffrey Donaldson (1962- ) is a Loyalist politician who famously walked out of the 1998 Good Friday peace negotiations. 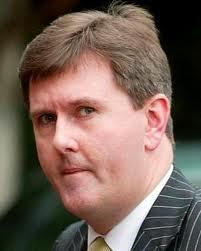 Born in the coastal village of Kilkeel, Donaldson was one of eight children in a middle-class Protestant family. He was educated at Kilkeel High School and later in Belfast. Donaldson joined the Orange Order at age 16 and the Ulster Unionist Party (UUP) in 1981. He became chairman of the Young Unionists four years later.

Donaldson’s political views were hardened by the deaths of two cousins, both Royal Ulster Constabulary (RUC) officers killed by Provisional IRA bombs. Donaldson himself volunteered with the Ulster Defence Regiment (UDF) for a time. In October 1985 he stood as a candidate for the seat of South Down. Donaldson’s victory at age 22 made him the youngest member of the Northern Ireland Assembly.

In 1997, Donaldson was elected to the British House of Commons, representing the seat of Lagan Valley. The following year he was selected on the UUP’s negotiating team for the Good Friday talks. During these negotiations, Donaldson took a tough stand on IRA decommissioning. He demanded evidence of the IRA surrendering its weapons, rather than promises or timeframes, and refused to submit to power-sharing until IRA guns had been handed over. He also opposed the dissolution of the RUC and the early release of prisoners convicted by paramilitary killings.

Donaldson walked out of the Good Friday negotiations after these demands were not implemented. Donaldson became a strident critic of UUP leader David Trimble, who supported the final agreement. These disputes evolved further, leading to a split in the UUP and Donaldson’s resignation from the party in December 2003.