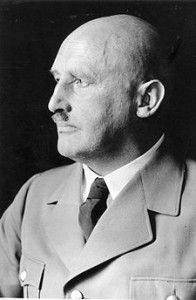 Julius Streicher (1885-1946) was a German Nazi party member, political leader and propagandist. He is best known as the publisher of Der Sturmer, one of Nazi Germany’s most anti-Semitic newspapers. Though Streicher did not participate directly in the mass killing of Jews, his propaganda certainly contributed to the environment in which it could be carried out.

Julius Streicher was born in Bavaria in 1885. Like his father before him, he trained and worked as a primary school teacher. Streicher joined the German army in 1914, served for the duration of World War I and rose to the rank of lieutenant. After the war he returned to teaching, remaining the profession until the 1930s.

During the 1920s, Streicher joined a series of political parties, both left-wing and right-wing, as if on a search for meaning. The idea that dominated his thinking, however, was an intense anti-Semitism bordering on pathological hatred.

Streicher’s anti-Jewish views were so strong that even in groups containing numerous anti-Semites, he became an outsider. He left at least two political groups because of their ‘soft’ attitude towards Jews and was booted out of two other groups that found him nasty and obsessive. “My anti-Semitic views are for me like a religious faith”, Streicher later wrote. “The racial question is the key to world history.”

In 1921, Streicher finally found his political home. After listening to Adolf Hitler deliver a three-hour speech in Munich, Streicher rushed to join the NSDAP. Streicher and Hitler eventually formed a tentative friendship. By this point, Streicher had a significant personal following of his own, and Hitler sought to attract them to his own party. Joachim Fest wrote of their relationship:

“[Streicher] was making a reputation as the spokesman for a scurrilous kind of pornographic anti-Semitism. Streicher seemed obsessed by wild fantasies of ritual murders, Jewish lust, world conspiracy, miscegenation [inter-racial sex], and lascivious black-haired devils panting after the innocent flesh of Aryan women. It is true that Streicher was more stupid and limited than [Nazi propagandist Hermann] Esser, but locally he could rival even Hitler… Hitler went to considerable trouble to win over Streicher. He wanted, of course, to make use of Streicher’s popularity for his own ends. But he probably also felt a common bond with the man, for did they not share the same complexes and obsessions? Up to the last, Hitler remained loyal to Julius Streicher, despite the revulsion he aroused [in others].”

In November 1923, Streicher marched alongside Hitler in the failed Munich putsch, an act that secured him Hitler’s trust and protection.

In 1925, Streicher was appointed Gauleiter (party leader) for Nuremberg and Franconia, a position that provided him with significant authority and power, including command of local Sturmabteilung (SA) and Schutzstaffel (SS) units.

When Hitler came to power in January 1933, Streicher put his anti-Semitism into practice, ordering boycotts of Jewish businesses, attacks on political opponents, even the October 1938 destruction of the Essenweinstrasse Synagogue in Nuremberg (Streicher’s excuse was that it was “an oriental monstrosity of a building”).

Though evidence is scant, Streicher also used his political influence to line his own pockets. He secretly acquired Jewish property confiscated during Kristallnacht and allegedly took bribes from businessmen, while living extravagantly.

Streicher’s most infamous contribution to Nazi anti-Semitism, however, was a newspaper: Der Sturmer (‘The Attacker’). It was arguably the most anti-Semitic publication of the Nazi era.

In the spring of 1923, Streicher sought Hitler’s approval to start a new weekly publication. The NSDAP already had an ‘official’ newspaper, Volkischer Beobachter, but it was a carefully edited broadsheet aimed at the middle classes. Streicher wanted a tabloid paper for the working classes to focus on Jewish misconduct and deviant behaviour.

In May 1923, the first edition of Der Sturmer came off the presses. Its self-declared mission was to expose Jewish sexual deviancy, corruption and scams. In reality, it was a crude and low-brow gossip sheet, filled with sex scandals, innuendo, dubious humour and brazen anti-Semitism. The front page of every edition carried the motto Die Juden sind unser Ungluck (‘The Jews are our misfortune’).

Der Sturmer also made extensive use of cartoons and ink drawings, featuring common Jewish physical stereotypes. Jews were caricatured as swarthy, obese, greedy, big-nosed and beady-eyed. They were shown hovering in the shadows plotting, ripping off honest Germans or lusting after Aryan women.

The text of Der Sturmer, some of which was personally written by Streicher, was a combination of anti-Semitic editorials and ‘news’ stories about Jewish crimes. The vast majority of these stories were either wildly exaggerated or entirely fictional. Der Sturmer went as far as repeating the ludicrous ‘blood libel’, publishing baseless reports that Jews were killing Christian children during Easter.

The lurid content of Der Sturmer made it popular with ordinary Germans, the paper’s weekly circulation reaching 100,000 in mid-1934 and almost 500,000 by the end of 1935. Streicher even had special display boards erected in public streets, where the previous week’s edition of Der Sturmer was posted for passers-by to read.

Streicher also made use of his teaching experience by incorporating anti-Semitic propaganda into children’s books. The first of these, published in 1936, was called Trau keinem Fuchs auf groner Heid und keinem Jud bei seinem Eid (‘Don’t Trust a Fox in a Green Meadow or the Word of a Jew’). A picture book for young children, it showed scenes comparing the lives of honest, hard-working Aryan Germans with slovenly, under-handed Jews. More than 100,000 copies were published and distributed to state schools.

In 1938, this was followed by the better-known Der Giftpilz (‘The Toadstool’), illustrated by Philipp Rupprecht, Der Sturmer’s chief cartoonist. Der Giftpilz opened with a German mother telling her son that people are like mushrooms: “one must be able to tell the good ones from poison ones”. Its colour plates show the kinds of malevolent occupations that Jews usually fill: devious swindlers, money-hungry bankers, greedy landlords and untrustworthy salesmen. One plate in Der Giftpilz even implies that Jewish men are child molesters.

A third book, Der Pudelmopsdachelpinscher (‘The Poodle-Pug-Daschund-Pinscher’) was published in 1940 and suggested that Jews were a cross-bred mongrel race.

Streicher began to fall from grace in the late 1930s, due chiefly to his excessive behaviours, rumours of corruption and theft of Jewish property and an ongoing feud with Hermann Goering, who detested him. Streicher was stripped of his party offices in early 1940 but continued publishing Der Sturmer until February 1945.

Julius Streicher was captured by American troops in Austria shortly after the German surrender in 1945. Despite not being a member of the national government or having a military role, prosecutors declared Streicher a major war criminal and placed him on trial at Nuremberg. His testimony was unrepentant, unremorseful and repeated some of the anti-Semitic ideas he had unleashed in Der Sturmer.

Unsurprisingly, Streicher was found guilty of crimes against humanity and hanged at Nuremberg in October 1946. His execution was botched and he died slowly of strangulation rather than a broken neck.

“The Third Reich’s foremost anti-Semite was a short (only 5 feet 2 inches tall) stocky and muscular man, who kept his head shaven bald. He coarse features gave him an intimidating appearance and he became widely known for his corruption, greed, sexual extravagance and sadism. During his reign as uncrowned ruler of Nuremberg, he was seldom seen without a whip, and he was fond of boasting about the countless lashings he had meted out. Streicher typified many Nazi stereotypes: the half-crazed sadist, the agitator, self-proclaimed pornographer. Anyone who dared challenge the ‘King of Franconia’ risked prison and torture.”
Eric Zillmer, historian

1. Julius Streicher was a former school teacher, World War I veteran and NSDAP member. He was among the worst Nazi anti-Semites, nurturing a pathological hatred of Jewish people.

2. Streicher joined the NSDAP in 1922 and became friendly with and fiercely loyal to Adolf Hitler, who shared his views and offered Streicher support and protection.

3. Streicher held positions of power in the party, such as Gauleiter of Nuremberg. He used this authority to initiate attacks, boycotts and property seizures against Jews.

4. Julius Streicher is best known as the publisher of Der Sturmer, a newspaper aimed at working-class Germans that used crude imagery and false reports to attack Jews.

5. Streicher also published anti-Semitic propaganda for German children, such as Der Giftpilz, which likened the Jews to poisonous toadstools masquerading as mushrooms.