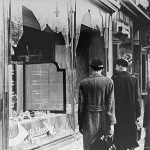 Broken shop windows after Kristallnacht in 1938

The year 1938 saw the Nazis intensify their campaign against German Jews. In November 1938 the Nazi leadership, on the orders of propaganda chief Joseph Goebbels, initiated a violent and destructive series of pogroms (anti-Jewish riots) across much of Germany. For several days Nazi agents and sympathisers attacked Jewish individuals, communities and businesses, causing death, injury and significant property damage. They set fire to 200 synagogues, destroyed 7,000 Jewish businesses and killed almost a hundred innocent Jewish citizens. Around 30,000 people were rounded up, arrested and transported to concentration camps. This attack became known as Kristallnacht (‘crystal night’, or ‘the night of broken glass’) after the smashed windows and glass that littered the streets the next morning. While Kristallnacht was not the Nazi movement’s first attack on German Jews, it marked a dramatic escalation and an ominous hint of what was to come.

The pretext for this sledgehammer action against German Jews came with the murder of Ernst vom Rath. A Frankfurt-born diplomat and a member of both the NSDAP and the SA, vom Rath was employed in the German embassy in Paris. On November 7th 1938, vom Rath was shot by Herschel Grynszpan, a 17-year-old Jew angry that his family had been deported from Germany to Poland. As vom Rath lay mortally wounded in hospital, the Nazi regime launched an immediate response to his shooting: all Jewish publications were shut down, while all Jewish children were banned indefinitely from German schools. Hitler’s acolytes issued public statements claiming that the attack on vom Rath was part of a Jewish conspiracy. Local Nazi leaders carried out sporadic attacks on Jews and Jewish property. On November 9th, vom Rath died from his wounds. Later that day members of the Nazi hierarchy, including Hitler and Goebbels, met in Munich to mark the 15th anniversary of the Beer Hall Putsch.

Hitler was scheduled to deliver a commemorative speech but instead delegated this task to Joseph Goebbels then left early. The propaganda chief delivered one of the most caustic anti-Semitic speeches of the Nazi era, announcing vom Rath’s death and arguing that “Jews should feel the anger of the people”. It some respects it was a typical Goebbels speech, playing on and exploiting public fears and hatreds – but there might also have been a political purpose to his speech. Goebbels was out of favour with Hitler by this point, after his affair with a prominent actress had become public knowledge and threatened his marriage (Hitler liked Magda Goebbels but despised unfaithful marriages). Goebbels’ inflammatory speech may have been an attempt to restore Hitler’s trust by pandering to his anti-Semitism.

Whatever Goebbels’ motives, his speech prompted NSDAP Gauleiters to take immediate action. Men under their command were ordered to change into civilian clothes, to give the impression that any violence was a spontaneous civilian uprising. They were to destroy Jewish synagogues, businesses and homes – but not to steal from them. They were to seize archival records and rolls from synagogues and hand them to party officials. They were to seize any rifles or weapons owned by Jews. They were to leave non-Jewish buildings untouched and, at all costs, to avoid harassing non-Jews and foreigners. They were to fill the local prison cells with as many Jews as possible.

“The demonstrations should be allowed to continue. The police should retreat. Let the Jews get a taste of popular anger. He is right. I immediately instructed the party and police accordingly. Then I gave a short speech along these lines to the Party leadership. Loud applause. Everybody goes to the telephones. Now the people are going to act. I wish to return to my hotel and see a glow as red as blood. The synagogue is burning. We only put out the fires when they endanger adjacent buildings. If not, they should be burned to the ground. Reports come from all over the Reich – 50 synagogues, then 70 are on fire. The Fuehrer ordered 20,000 or 30,000 Jews to be arrested. Public anger is running wild. They have to be given the possibility to vent their rage. Driving to the hotel, windows are being smashed. Bravo, bravo. The synagogues burn like big old huts. There is no danger to German property. For the time being there is nothing more to be done.”

“The Kristallnacht was a monumental development in Nazi anti-Jewish policy for several reasons. It was the single instance of large-scale public and organised physical violence against Jews in Germany before the Second World War. It unfolded in the open, in hundreds of German communities, even those with very few Jewish residents, and took place partly in broad daylight. It inaugurated the definitive phase of so-called Aryanisation: the coerced expropriation of German-Jewish property… [It was] the culmination of a brutal trajectory.”
Alan E. Steinweis, historian

Though the SS and SA were ordered not to avoid physical violence against non-resisting Jews, this order was routinely breached. A total of 91 people were murdered during Kristallnacht. One lady was shot by an impatient soldier when she refused to tell him the location of her husband. A Jewish rabbi was killed for insulting Goebbels. Others were burned alive when their homes or businesses were set alight. The SS arrested 30,000 Jews – mostly fit young men – and shipped them to concentration camps at Dachau, Buchenwald and Sachsenhausen. Around 2,000 died from torture and beatings in those camps; the remainder were released weeks later, on the proviso they leave Germany.

The violence died down by the afternoon of November 11th – again following an order from Goebbels. The Nazi government announced its intentions to fine German Jews a total of one billion Reichsmarks for “destabilising” acts that “upset public order”. In varying degrees, Paris, London and Washington DC all condemned the Hitler regime for inciting and failing to constrain race riots. The response of ordinary Germans was more interesting. Some certainly backed the pogrom and welcomed further strong action against the Jews, while others were indifferent. But there were also public criticisms and condemnations of Kristallnacht – at least to the extent that such things were possible in Hitler’s Germany. Many German civilians were prepared to tolerate legal and administrative measures against the nation’s Jews but were appalled by the wanton violence and destruction of November 1938.

1. Kristallnacht (‘night of broken glass’) refers to three days of Nazi-sponsored violence against German Jews.
2. It was sparked by propaganda minister Goebbels, who called for action against the Jews in a 1938 radio speech.
3. Most of the violence was conducted by Nazis masquerading as citizens, to present it as a popular uprising.
4. It mainly comprised attacks on property, such as the destruction of synagogues and of Jewish-own businesses.
5. Thousands of people were also arrested on Kristallnacht and interned in concentration camps.

Do NOT follow this link or you will be banned from the site!