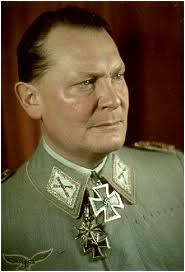 Hermann Goering or Göring (1893-1946) was a German World War I veteran turned Nazi. He became the second-most influential figure in the Nazi government behind Adolf Hitler. In this high office, Goering played a significant role in the Final Solution. He was placed on trial at Nuremberg but committed suicide before being brought to justice.

Goering was born into an affluent Bavarian family, the son of a former governor-general in colonial Africa. At 16, he entered a military academy, and three years later followed his father into the Prussian army.

Goering served in the trenches of the Western Front until late 1916 when he transferred to the German air force. He was shot in the pelvis early in his flying career but recovered, earning a name as a talented and daring, if somewhat arrogant fighter pilot.

Like other future Nazis, Goering was disenchanted by Germany’s defeat and believed his country had been ‘stabbed in the back’ by socialists and Jewish politicians. He joined the Nazi Party in 1922 and met Hitler shortly after.

Impressed by his war service and personal bearing, Hitler put Goering in charge of the Sturmabteilung (SA). Goering also participated in the Nazis’ failed Munich putsch in November 1923. In the violence that followed, Goering was shot in the groin and forced to flee to Austria until 1927.

By the late 1920s, Goering was a member and then president of the German Reichstag. In 1933, he was appointed to Hitler’s cabinet. The following year, he organised and formed the Gestapo state security police. As Hitler’s second in command, Goering was given responsibility for several important policy areas, including economic programs, military expansion and the formation of the Luftwaffe (air force).

While Goering’s personal views are unclear, he embraced and advanced the Nazi Party’s anti-Semitism. He benefited personally from the acquisition of property from wealthy German Jews and supported the party’s anti-Jewish policies. It was Goering who issued Reinhard Heydrich with the June 1941 order to initiate a ‘Final Solution to the Jewish Question’.

Goering surrendered to the Americans at the end of World War II, having resigned all his offices a fortnight earlier. He was detained and placed on trial at Nuremberg, charged with initiating the war, war crimes and crimes against humanity. He pleaded not guilty to all charges and his attitude to the court proceedings would range from disinterest to contempt.

The Nuremberg tribunal found Goering guilty of all four charges and sentenced him to hang. He committed suicide the night before his hanging by swallowing a cyanide tablet given to him by persons unknown.