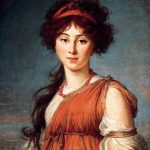 Germaine de Staël (1766-1817), better known as Madame de Staël, was the daughter of Jacques Necker and a notable salonniere and author. Born in Paris, Germaine Necker excelled as a student, receiving a liberal education in the works of Rousseau, Montesquieu and others. She also attended salons hosted by her mother. In 1786 Necker participated in an arranged marriage with Erik de Staël, a Swedish baron 17 years her senior. As Madame de Staël, she became a fervent supporter of the revolution, attending sessions of the Estates-General at Versailles. De Staël was an advocate of constitutional reform, a supporter of Mirabeau and, later, the Girondins. She fled the Reign of Terror in 1793, living in exile in Switzerland and England before returning to Paris in late 1794. De Staël began a prolific writing career, penning numerous essays, novels and histories. Her history of the revolution, Considerations on the Principal Events of the French Revolution, was published in 1798. In this extract, De Staël reflects on the power wielded by Maximilien Robespierre and the Committee of Public Safety:

“Had a division not taken place among the deputies of the [National] Convention, it is impossible to say how long the atrocious government of the Committee of Public Safety would have lasted. This Committee was not composed of men of superior talent. The machine of terror, the springs of which had been prepared for action by events, exercised alone unbounded power. The government resembled the hideous [guillotine] employed on the scaffold; the axe was seen, rather than the hand which put it in motion. A single question was sufficient to overturn the power of these men… Their force was measured by the atrocity of their crimes and nobody dared attack them. These 12 members of the Committee of Public Safety distrusted one another, as the Convention distrusted them, and they distrusted it. The army, the people and the partisans of the revolution were all mutually filled with alarm.

No name of this epoch will remain except Robespierre. He was neither more able nor more eloquent than the rest – but his political fanaticism had a character of calmness and austerity which made him feared by all his colleagues. I once spoke with him at my father’s house in 1789, when he was known only as a lawyer from Arras with extreme democratic principles. His features were mean, his complexion pale, his veins had a greenish hue. He maintained the most absurd propositions with a coolness which had the air of conviction. I could easily believe that at the beginning of the Revolution, he adopted ideas on the equality of fortunes as well as of ranks… But he became ambitious when he triumphed over his rival demagogue, Danton, the Mirabeau of the mob. Danton had more spirit than Robespierre and was more accessible to pity. But it was suspected, and with reason, that [Danton] was not immune to the seduction of money – a weakness which, in the end, always ruins demagogues, for the people cannot endure those who enrich themselves…

Danton was divisive, Robespierre was hypocritical. Danton was fond of pleasure, Robespierre only of power. He [Robespierre] sent to the scaffold some as counter-revolutionists, others as ultra-revolutionists. There was something mysterious in his manner that caused an unknown terror to hover about in the midst of the visible terror that the government proclaimed. He never adopted the means of popularity then generally in use. He was not ill-dressed. On the contrary, he was the only person who wore powder in his hair; his clothes were neat and his countenance had nothing familiar. The desire of ruling carried him, without doubt, to distinguish himself from others at the very moment when equality in everything was desired.

Traces of a secret design are also perceived in the confusing discourses he made in the Convention which, in some respects, remind one of Cromwell. It is rare indeed that anyone who is not a military chief can become a dictator – but the civil power then had much more influence than the military. The republican spirit led to a distrust of all the victorious generals; the soldiers themselves delivered up their leaders as soon as the least alarm arose. Political dogmas… reigned at that time, not men. Something abstract was needed in authority, so that everybody might be thought to have a share in it. Robespierre acquired the reputation of high democratic virtue and so was believed to be incapable of personal views. As soon as he was suspected of having them, his power was at an end.”