Denis Diderot (1713-1784) was a writer and philosopher whose corpus of work contributed to the ideas of the French Revolution. 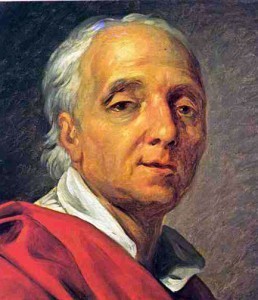 Shunning careers in the law and the clergy, Diderot decided instead to become an author. He spent a decade writing prolifically, though it brought him neither fame nor financial reward.

Philosophically, Diderot’s work was clearly shaped by the Enlightenment: he advanced theories about logic, education and human society, often criticising organised religion and the traditions of the Ancien Régime. This occasionally got him into trouble, as in 1749 when Diderot was imprisoned for almost a year.

On his release from prison, Diderot began writing and assembling his best-known work, Encyclopédie. As the name suggests, it was a vast compilation of articles and essays, designed (according to Diderot) to “change the way people think”.

It took Diderot more than two decades to complete this enormous 27-volume work, the first copies of which appeared in the early 1770s. Though it was loathed by the church and suppressed by the government, the Encyclopédie became the handbook to the French Enlightenment; it was widely read and discussed in the salons and political clubs.

Diderot himself spent the last ten years of his life studying more than writing, before succumbing to emphysema in 1784.

Citation information
Title: “Denis Diderot”
Authors: John Rae, Steve Thompson
Publisher: Alpha History
URL: https://alphahistory.com/frenchrevolution/denis-diderot/
Date published: May 7, 2017
Date accessed: August 01, 2022
Copyright: The content on this page may not be republished without our express permission. For more information on usage, please refer to our Terms of Use.