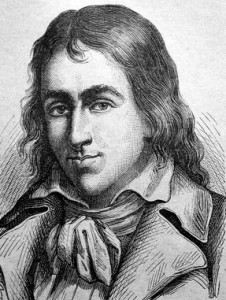 Jacques Rene Hébert (1757-1794) was a populist journalist who led the most radical sections of the Paris sans culottes.

Born in Normandy, Hébert was encouraged to become a lawyer by his father, a former judge. By the mid-1780s, Hébert had moved to Paris, where he eked out a living writing plays and pamphlets.

As revolutionary sentiments intensified, Hébert’s writing became more political: he slammed Louis XVI, the royal family and the Second Estate for their profligate lifestyle and disdain for the ordinary people.

In 1790, Hébert formed his own newspaper, Le Pere Duchesne, one of several to bear this title. Written in plain, often earthy language, Le Pere Duchesne was most certainly aimed at the urban sans culottes. Within a few months, it had become the most popular newspaper in Paris, thrusting Hébert into the political spotlight.

Hébert joined the Cordeliers Club in 1791 and became a member of the Paris Commune after its seizure by radicals in August 1792.

Like Jean-Paul Marat, Hébert attacked anyone and everyone he perceived to be ‘enemies of the revolution’. His rants against the Girondins in 1793 were instrumental in their inciting their arrest. In September 1793, Hébert and his sans culotte followers gatecrashed the National Convention, demanding the introduction of fixed food prices.

This marked the zenith of Hébert’s influence – but also the beginning of his demise. Within weeks he was also attacking Georges Danton and the Indulgents, then Robespierre and the Committee of Public Safety. Hébert and his followers were arrested in March 1794, given a show trial then executed a fortnight later.

Citation information
Title: “Jacques Hébert”
Authors: Jennifer Llewellyn, Steve Thompson
Publisher: Alpha History
URL: https://alphahistory.com/frenchrevolution/jacques-hebert/
Date published: May 30, 2017
Date accessed: July 07, 2022
Copyright: The content on this page may not be republished without our express permission. For more information on usage, please refer to our Terms of Use.