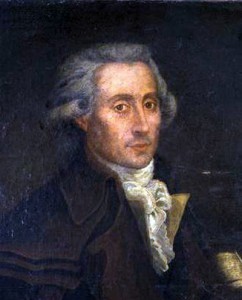 Georges Auguste Couthon (1755-1794) was a radical Jacobin and a member of the Committee of Public Safety.

Born in south-central France, not far from Lyon, Couthon trained as a lawyer and worked in local politics. In 1791, he moved to the capital after being elected to the Legislative Assembly, immediately taking membership of the Jacobin Club. Confined to a wheelchair by a disease of uncertain origins, possibly multiple sclerosis, Couthon remained mobile enough to become an effective politician.

Like many other revolutionaries, Couthon’s political views changed over time. Though initially a moderate Jacobin, he steadily became more radical.

In early 1793, Couthon voted for the execution of the king; in the middle of that year he was part of the chorus demanding the arrest of Girondinist deputies in the National Convention. Couthon was also a member of the Committee of Public Safety, which in late 1793 despatched him to oversee the capture of Lyon from counter-revolutionaries.

From that moment, Couthon’s actions and positions mirrored those of Maximilien Robespierre, whose fate he also shared. Acting on their own, Couthon and Robespierre drafted the notorious Law of 22 Prairial, which left suspects before the Revolutionary Tribunals with virtually no means of defending themselves.

When Robespierre was deposed and arrested in July 1794, Couthon followed him to the guillotine.

Citation information
Title: “Georges Couthon”
Authors: John Rae, Steve Thompson
Publisher: Alpha History
URL: https://alphahistory.com/frenchrevolution/georges-couthon/
Date published: May 18, 2017
Date accessed: July 03, 2022
Copyright: The content on this page may not be republished without our express permission. For more information on usage, please refer to our Terms of Use.