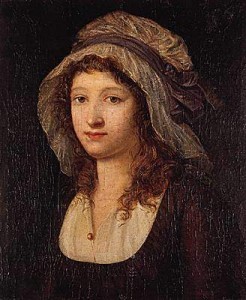 Charlotte Corday (1768-1793) was the young Girondin woman most famous for stabbing Jean-Paul Marat to death as he lay in the bath.

Born into a family of minor nobility in Normandy, Corday was given a solid education and encouraged to read. She was sent to a religious school for girls, where she had access to works by the revolution’s great philosophes.

Corday came to embrace moderate republican ideas: she admired Jacques Brissot and the Girondins but found the radicals in the Montagnard and the Jacobin Club both dangerous and objectionable.

In mid-1793, Corday resolved to take action, moving from Caen to Paris, purchasing a knife and plotting to murder Marat, the most radical and vitriolic of the Jacobins.

On July 13th 1793, Corday was granted an appointment with Marat by claiming to have information about Girondinist fugitives. After being shown into Marat’s quarters, she stabbed him fatally as he lay in his bathtub.

Corday was promptly arrested and put on trial; her accusers were convinced of other conspirators, however, she was almost certainly acting alone. Corday was executed on July 17th, four days after despatching Marat, who she described as a “monster”.