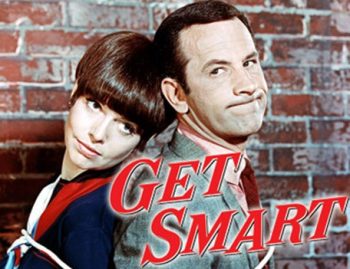 Get Smart is an American television comedy, created by Mel Brooks and Buck Henry and first broadcast in 1965. It starred Don Adams as Maxwell Smart, Barbara Feldon as Agent 99 and Edward Platt as The Chief.

Get Smart was a depiction of Cold War espionage and spy culture, distorted with parody, satire, slapstick and wordplay. According to its creators the series was inspired by the James Bond books and films, Inspector Clouseau from the Pink Panther movies and The Man from UNCLE, a contemporary television drama about international espionage.

Get Smart was very popular with TV audiences, running for 138 episodes across five seasons. It also spawned a 1980 film (The Nude Bomb), a 1995 television revival and a 2008 remake starring Steve Carell and Ann Hathaway.

Maxwell Smart is an American spy with the code name Agent 86. Together with his female offsider, the glamorous but unnamed Agent 99, they work for a counter-espionage agency named CONTROL. Their missions are assigned by the ‘Chief’, who is regularly frustrated and annoyed by Agent 86’s bumbling.

CONTROL agents have access to an array of secret gadgets, such as a telephone concealed in Smart’s shoe, a humanoid robot named Hymie and various concealed devices that explode, kill or maim. In most of their operations, Agents 86 and 99 encounter other secret agents and grandiose plots devised by KAOS, CONTROL’s nemesis organisation. Many KAOS agents, such as 86’s arch-enemy, Siegfried, have Russian, German or eastern European names and accents.

Despite Smart’s apparent incompetence, he always manages to complete his mission – either through luck or intervention by Agent 99. Much of the comedy in Get Smart is derived from Smart’s catchphrases. Several of these, such as “Missed it by that much”, have passed into common usage.

In this scene from Get Smart, the Chief begins to brief Maxwell Smart on a secret mission – only for Smart to insist on using a malfunctioning security device called the ‘Cone of Silence’:

Citation information
Title: “Get Smart (1965)”
Authors: Jennifer Llewellyn, Steve Thompson
Publisher: Alpha History
URL: https://alphahistory.com/coldwar/get-smart-1965/
Date published: September 24, 2018
Date accessed: November 27, 2021
Copyright: The content on this page may not be republished without our express permission. For more information on usage, please refer to our Terms of Use.