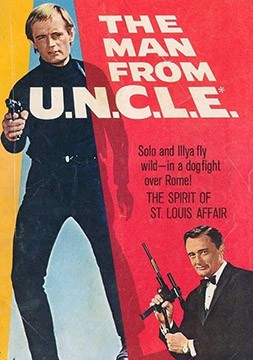 The Man from UNCLE is an American television series, created by Sam Rolfe and first broadcast in 1964. It starred Robert Vaughn as Napoleon Solo, David McCallum as Illya Kuryakin and Leo G. Carroll as Alexander Waverly. Many of its characters and concepts were devised by James Bond creator Ian Fleming – in fact the series’ original name was Ian Fleming’s Solo.

The series’ lead characters, Napoleon Solo and Illya Kuryakin, are “enforcement officers” working the United Network Command for Law Enforcement (or UNCLE). Unlike the American CIA or the Soviet KGB, UNCLE is a multinational organisation manned by agents from around the world. Solo is American, Kuryakin is Soviet and their boss Waverly is British. UNCLE’s nemesis is a shadowy criminal group called THRUSH. Though its politics and motives are never clearly explained, THRUSH is so malevolent and dangerous that even Cold War rivals have set aside their differences to combat it.

The Man from UNCLE was a groundbreaking series that shaped the depiction of espionage in popular culture. Most of its episodes revolved around secret plots, devious villains, amazing gadgets, hi-tech weapons, thrilling gunfights and chases.

After its first season The Man from UNCLE became one of the highest rating programmes on American television. Its stars were swamped by fan mail and mobbed by teenagers – particularly McCallum (Kuryakin), who was dubbed the “sexist Soviet on TV”. The series won several Emmy Awards, as well as the 1966 Golden Globe for best TV programme, and spawned eight different motion pictures. It also gave rise to books, comics, toys and a spin-off series, The Girl from UNCLE. A film adaptation starring Henry Cavill, Armie Hammer and Hugh Grant was released in 2015.

The Man from UNCLE’s connection with the Cold War was tenuous. UNCLE itself is an apolitical agency, apparently unaligned with any government, while the series’ storylines focused on investigating crime rather than covert political plots.

There was some subtle nationalistic stereotyping in the lead characters. The American agent Solo presents as intelligent, worldly, extroverted and, at times, hedonistic. Kuryakin, in contrast, is physically stronger, reserved, disciplined and ruthless. Both men have a sense of humour, though Kuryakin’s is dry and more restrained. The Man from UNCLE’s main contribution to Cold War culture was that it popularised – and to some extent legitimised – the work of undercover spies.

Citation information
Title: “The Man from UNCLE (1964)”
Authors: Jennifer Llewellyn, Steve Thompson
Publisher: Alpha History
URL: https://alphahistory.com/coldwar/the-man-from-uncle-1964/
Date published: September 28, 2018
Date accessed: January 27, 2021
Copyright: The content on this page may not be republished without our express permission. For more information on usage, please refer to our Terms of Use.

This Cold War site contains articles, perspectives and sources on global events and tensions between 1945 and 1991. This site is created by Alpha History and contains 311,904 words in 408 pages. It was updated on November 28th 2020. For more information, visit our FAQ page or Terms of Use.