James Bond (1953- ) is a fictional British secret agent and assassin, who appeared in several books and motion pictures during the Cold War. Early iterations of Bond saw him crossing swords with Soviet agents. 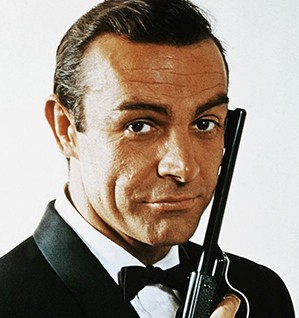 James Bond was a creation of British naval officer turned writer Ian Fleming (1908-64). Fleming had worked in intelligence during World War II, planning secret operations and organising raids. He commanded an elite group of commandos (’30 Assault Unit’) that operated throughout Europe. Fleming also visited the United States and contributed to the reworking of American intelligence agencies.

Fleming was neither a spy nor a commando, though he had a working knowledge of them. After the war, Fleming worked as a foreign correspondent while spending winters at ‘Goldeneye’, his holiday home in Jamaica. It was here that he wrote Casino Royale (1953), the first novel to feature James Bond.

Bond, like Fleming himself, holds the rank of commander in the Royal Naval Reserve. He is recruited by MI6, a British secret intelligence agency that gathers information on foreign activities. While working for MI6, Bond goes by the codename “Agent 007”; he is instructed and debriefed by managers with similar codenames, such as “M” and “Q”.

In Casino Royale, Bond undertakes a mission against a Russian double-agent in France and does battle with members of SMERSH, a fictional Soviet spy agency. In subsequent stories, Bond does battle with a succession of Russian and Asian communists, neo-Nazis and criminal masterminds.

Bond in the movies

The first James Bond film came in 1962, with Sean Connery starring as Bond in Dr No. While Cold War political tensions and espionage were a sharp feature of Fleming’s novels, film adaptations of James Bond have tended to play down or ignore these factors.

As of 2016, there have been 26 James Bond films produced. The character has been played by a number of actors including Connery, George Lazenby, Roger Moore, Timothy Dalton, Pierce Brosnan and Daniel Craig. There have also been several television and radio adaptations, cartoon strips, novels, spin-offs and prequels.