Dag Hammarskjöld (1905-1961) was the second Secretary-General of the United Nations, serving from 1953 until his death in a suspicious plane accident in 1961. 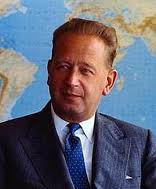 Hammarskjöld was born in southern Sweden. His father was Hjalmar Hammarskjöld, a prominent cabinet minister and later Swedish prime minister (1914-17). Hammarskjöld’s family was of noble blood and his upbringing was comfortable and privileged, nevertheless he committed himself to education and public service. Between 1925 and 1930, he graduated with three different degrees, in the humanities, economics and law.

Hammarskjöld worked in the Swedish civil service while completing his doctorate in economics. An exceptional planner and negotiator, he rose through the ranks of the Swedish bureaucracy, becoming undersecretary for finance (1936) and an adviser to cabinet ministers. He also served as chairman of Sweden’s National Bank.

Hammarskjöld became involved in foreign policy after World War II. In 1947 he served as a delegate at economic planning conferences that developed the Marshall Plan. In the late 1940s and early 1950s, Hammarskjöld held several positions in the Swedish government, while also heading Swedish delegations to the United Nations (UN).

In 1953, he was appointed as UN Secretary-General, replacing the controversial Trygve Lie. Hammarskjöld’s appointment surprised many, given his low profile and age (he was only 47, the youngest person to be named Secretary-General).

During his eight-year tenure, Hammarskjöld attempted to mediate and resolve international crises in Africa, Asia and the Middle East, several of them connected to the Cold War. Hammarskjöld was not popular, especially with major powers like the US and USSR, who considered him either too neutral or too interventionist.

In September 1961, Hammarskjöld and 14 others were killed when their plane exploded and crashed over Zambia, Africa. This incident prompted a raft of conspiracy theories that claimed Hammarskjöld was murdered by American, British or South African agents. After Hammarskjöld’s death the Burmese diplomat U Thant was elected as Secretary-General.