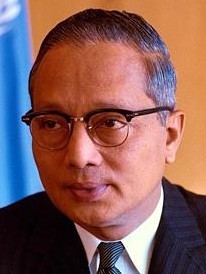 U Thant was born Maha Thray Sithu in south-west Burma, then a British colony. His father was an English-speaking academic who encouraged his children to study. Thant graduated from University College, Rangoon and became a high school teacher and, in 1935, a school headmaster.

In the late 1940s, Thant was recruited by the newly independent Burmese government. He worked in the areas of communications and foreign affairs, serving as the government’s press director and head of national broadcasting, before moving into policy development. He proved an effective administrator, filling several important positions in the Burmese bureaucracy.

In 1957 U Thant became Burma’s ambassador to the United Nations. Four years later he was appointed UN Secretary-General, following the sudden death of Dag Hammarskjold in a plane accident. A devout Buddhist with a conciliatory and thoughtful approach to international problems, Thant contributed to the resolution of several international incidents, including the colonial tensions in Algeria (1961) and the Congolese civil war (1966).

Unlike his predecessor Hammarskjold, Thant was widely respected by Cold War leaders on all sides. The Soviet Union, for example, opposed Thant’s appointment in 1961 yet supported his reappointment for a second term in 1966.

Thant’s tenure was not without its problems and failures, however. His attempts to bring about peace negotiations during the Cuban missile crisis (1962) and the Vietnam War (1965-75) were rebuffed and achieved little. Thant was also criticised for withdrawing UN peacekeeping troops from the Sinai peninsula in 1967, a decision that contributed to the Six Day War between Israel and a coalition of Arab states.

U Thant served two full terms as Secretary General before retiring at the end of 1971. He spent his retirement writing and campaigning for peace and other causes he had championed with the UN.

Thant died of cancer in November 1974. His death sparked a crisis in his native Burma, which had been ruled by an anti-democratic military junta since 1962. When Burma’s military government refused to give Thant a state funeral, his coffin was snatched by students. In the turmoil that followed government troops raided a college campus to recover Thant’s body, shooting dozens of students in the process.

Citation information
Title: “U Thant”
Authors: Jennifer Llewellyn, Steve Thompson
Publisher: Alpha History
URL: https://alphahistory.com/coldwar/u-thant/
Date published: October 26, 2018
Date accessed: January 29, 2023
Copyright: The content on this page may not be republished without our express permission. For more information on usage, please refer to our Terms of Use.