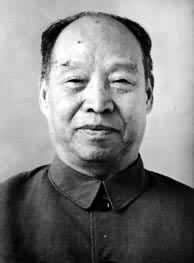 Peng Zhen (1902-97, Wade-Giles: P’eng Chen) was a communist revolutionary and politician, and the mayor of Beijing during the early 1950s.

Born to a poor family in Shanxi province, Peng worked with left-wing labour and youth groups before joining the Chinese Communist Party (CCP) in 1926. He was later imprisoned for several years by the Nationalists.

Peng fought with the CCP’s anti-Japanese guerrillas during the 1930s. An effective organiser and administrator, he was given several important roles in China’s northeast. By 1945, Peng was a member of the Politburo. Six years later, he became the mayor of Beijing, a position he held until his downfall.

Peng’s removal from office was triggered by his opposition to Mao Zedong during the first days of the Cultural Revolution. In January 1965, the Politburo named Peng at the head of the Five Man Group, which was tasked with responding to anti-socialist ideas in art and literature.

Unlike Mao, Peng did not consider dissenting cultural ideas a matter for the government. He believed they should be dealt with through academic debate, by “seeking facts from truth”.

The Five Man Group’s refusal to take firm action led to its dissolution and replacement in May 1966 and the onset of the Cultural Revolution. Peng was sacked from his positions, purged from the CCP and subject to harassment by the Red Guards.

Peng was rehabilitated by Deng Xiaoping in 1979 and restored to his role as mayor of Beijing. He became chairman of the National People’s Congress in 1983, occupying this role until his retirement in 1988.