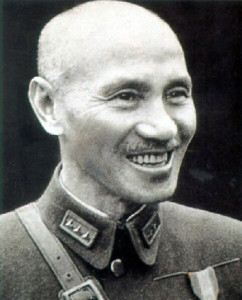 Jiang Jieshi (1887-1975, Wade-Giles: Chiang Kai-shek) was the leader of the Guomindang, the National Revolutionary Army and the Chinese republic between 1926 and 1949.

Jiang was born in Zhejiang, eastern China, the son of a successful salt merchant. As a young man, Jiang set his sights on a military career. He enrolled in the Baoding military academy, a training facility for New Army officers, then travelled to Japan for further training and military service there.

While in Japan, Jiang became involved in republican and revolutionary groups, joining Sun Yixian’s Tongmenghui in 1908. In 1911 he returned to China and participated in the Xinhai Revolution. By 1924, Jiang was commandant of the newly created Huangpu Military Academy and was considered an important figure in the Guomindang’s mission to reunify China.

When Sun Yixian died in March 1925, Jiang’s command of the military allowed him to gain control of the Guomindang – despite the claims of more senior political leaders. Jiang commanded the Northern Expedition (1926-28) that reunified China and brought the Warlord Era to an end.

In April 1927 he abruptly dissolved the First United Front by authorising the arrest and massacre of communists in Shanghai. For the next decade, Jiang was the ruler of China, recognised by his party and foreign powers, and not seriously challenged by either the Chinese Communist Party (CCP) or regional warlords. Jiang’s leadership style was authoritarian and paternalistic, drawing on neo-Confucian values and elements of European fascism.

During the 1930s Jiang’s government was challenged by Japanese aggression in China, however, Jiang believed the CCP and local warlords constituted a greater threat. Criticised for his failure to launch a sustained resistance against the Japanese, Jiang was kidnapped by nationalist warlord Zhang Xueliang in December 1936. As a consequence of the Xi’an Incident, as this event was known, Jiang was compelled to form a Second United Front with the CCP.

The outbreak of war with Japan in 1937 tested Jiang’s leadership and invited more criticism, from both his domestic and foreign allies. Nationalist forces were eventually driven from China by the CCP in 1949, forcing Jiang and his Nationalist entourage to flee to Taiwan.

Jiang served as head of the Guomindang and president of the Republic of China (Taiwan) until his death in April 1975. His leadership of China between 1927 and 1949 continues to divide opinion among historians.