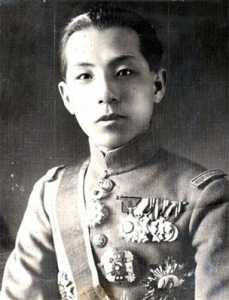 Zhang Xueliang (1901-2001, Wade-Giles: Chang Hsu-Liang) was a northern Chinese military leader and warlord, best known for his involvement in the 1936 Xi’an incident.

Zhang was born in Fengtian province. His father was Zhang Zuolin, a bandit turned warlord who effectively ruled Manchuria during the late 1910s and early 1920s.

The younger Zhang received a military education, both in China and Japan, before becoming a commander in his father’s Fengtian army. Though intelligent and well trained, Zhang Xueliang was also flighty, a heavy drinker and, for a time, an opium addict.

In 1928, Japanese agents assassinated his father, handing Zhang Xueliang control of Manchuria and the Fengtian army. To the surprise of some, Zhang aligned himself with Jiang Jieshi and the Guomindang, while adopting a strong line against Japanese and Soviet influence in Manchuria.

Zhang was politically opposed to the CCP but was willing to tolerate an alliance to resist Japanese aggression. In December 1936, Zhang instigated the Xi’an incident, kidnapping and detaining Jiang Jieshi until he agreed to an anti-Japanese alliance with the CCP.

Zhang later fled to Taiwan with Jiang Jieshi, before living out his final years in Hawaii.