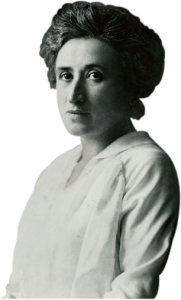 Rosa Luxemburg (1871-1919) was a Polish-German activist and political theorist, known for her opposition to World War I and her revolutionary socialism. Along with Karl Liebknecht, she was a key figure in the Spartakusbund and the early German Communist Party until her execution in January 1919.

Luxemburg was born in Poland, just a few weeks after the unification of Germany. Her family was Jewish working-class but able to put Luxemburg and her four siblings through high school.

Luxemburg became involved in radical political groups while still at school. In danger from the Russian secret police, she fled to Switzerland to study law and economics, obtaining a doctorate in 1898.

After graduating, Luxemburg was drawn to the German Social Democratic Party (SPD), Europe’s largest socialist party outside Russia. She married a German in order to obtain German citizenship and emigrated to Berlin.

In Berlin, Luxemburg became a prolific writer, public speaker and political educator, Friedrich Ebert being one of her early students. Her political position was a staunch defence of Marxist orthodoxy; she vehemently opposed attempts to revise or moderate it.

Luxemburg was further radicalised by the 1905 Revolution in Russia. She was appalled by World War I but even more by the support for the war from her fellow SPD members. She was a foundation member of the Spartacus League, campaigning adamantly against the war, attempting to whip up general strikes and circulating anti-war propaganda.

Luxemburg was imprisoned briefly in 1918. In January 1919, she became embroiled in the Spartacist Uprising in Berlin (an action she did not fully support) during which she was captured and executed, her body flung into a canal.