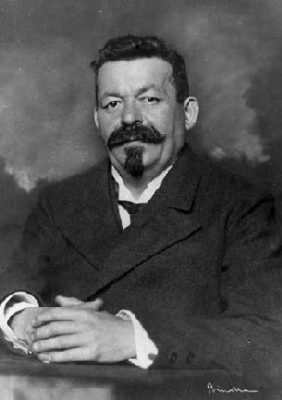 Friedrich Ebert played a pivotal role in post-war Germany and the formation of the Weimar Republic. He was the most significant politician in the early years of the Republic and its first president.

Born into a working-class family in 1871, Ebert was trained in leathercraft and made his early living as a saddler. In his 20s, Ebert became involved in trade unions then the left-wing of the Social Democratic Party (SPD). He became a member of the Reichstag in 1912 and leader of the SPD the following year.

By this time, Ebert’s own political views, which were never radical, had moderated. He remained sympathetic to unions and working-class interests but preferred the civility and certainty of political reform to upheaval, disorder and revolution. “Without democracy, there is no freedom”, Ebert said in 1918. “Violence, no matter who is using it, is reactionary”.

Support for the war

During World War I, Ebert invited criticism and controversy by supporting the war effort and the Kaiser’s wartime government. This position would cause a major split in the ranks of his party.

In 1915, a radical anti-war faction of the SPD, led by Karl Liebknecht, broke away to form the Spartakusbund. This group would form the basis of the Communist Party of Germany (KPD).

In October 1918, with the war going poorly and public morale collapsing, the government was assumed by a coalition led by liberal politician Prince Max von Baden. Ebert and Philipp Scheidemann became ministers, the first time that members of the SPD had been appointed to the national cabinet.

As this was transpiring, KPD members were themselves preparing to fill the power vacuum left by the collapsing old order.

As the communists organised and rallied their members for an attempt at socialist revolution, Ebert stood firm. His preference was for Germany to evolve into a social democracy, not have socialism thrust upon it by force.

Ebert would even later say of the prospect of a socialist revolution: “I do not want it, I even hate it like sin!”

On November 9th, the day he was proclaimed as president, Ebert made a handshake agreement with Wilhelm Groener, a member of the Reichswehr high command. Recognising the weakness of his government, Ebert sought the backing of the army. Groener reluctantly agreed, though he insisted that the new civilian government agree not to disband, reform or interfere with the Reichswehr.

The Ebert-Groener pact, as it became known, would become a critical factor in the government’s survival. The brigades of Freikorps (returned soldiers) who would defeat the Spartacist revolt acted with the endorsement of Reichswehr officers.

The radical left-wing of German politics condemned Ebert as a traitor, a man who had abandoned his socialist values and aligned himself with monarchists, militarists and reactionaries to cling to power. To the moderates and liberals, however, Ebert seemed the best candidate to oversee Germany’s transition to democracy.

In December 1918, Ebert convened elections for a new National Assembly. These elections were held on January 19th the following year and the assembly met the following month in Weimar, due to the continuing unrest in Berlin. This venue lent its name to the new government: the Weimar Republic.

The National Assembly elected Ebert as the Republic’s first president, a position he held until his death in 1925. In his six years in office, however, Ebert was confronted by political opposition and economic crises that threatened the fledgeling republic.

The communists, defeated in 1919 but not annihilated, continued to threaten revolution. So too did radical elements in the Reichswehr, Freikorps and nationalist parties. The political right-wing had helped save Ebert and the Republic from a communist revolution in 1919 but their ranks contained few supporters of republicanism or democracy.

The 1920s would be littered with dozens of right-wing political and paramilitary groups, all dreaming of the return of the monarchy, Bismarckian authority, restored military power and revived German prestige.

The Weimar Republic managed to survive these internal challenges but at considerable cost. The political divisions in Germany made government a long, arduous and sometimes impossible task.

Extremists conducted a campaign of intimidation and political violence. Several high-profile Weimar politicians were assassinated. Ebert and other leaders were subject to stinging political and personal criticism.

In 1924, during a defamation trial, a conservative judge declared the president guilty of “high treason” because he had supported striking munitions workers during the war.

These frustrations and attacks all took their toll on Ebert’s health. He died in office shortly after (February 1925). Ebert’s successor as president was Paul von Hindenburg, the Junker aristocrat who had been Germany’s military commander and de facto dictator for much of World War I. Hindenburg’s election was indicative of growing conservatism among German voters.

Historians are divided about Ebert’s legacy, his political views, his decision-making and the effectiveness of his presidency.

Ebert’s fellow socialists criticised him as a traitor for ignoring fundamental left-wing values and relying on the dangerous Freikorps to impose control. To those on the political right-wing, Ebert was a ‘November criminal’, a signatory to the hated Treaty of Versailles and a weak politician infected by socialist and democratic values.

More realistically, Ebert’s challenge of uniting Germany – at a time when it was so bitterly divided and stricken by economic problems – was perhaps an impossible one.

A historian’s view:
“In the early years of Weimar, Ebert acted as primus inter pares, or ‘big brother’, to coalition governments. Ebert possessed mixed values. On the one hand, Ebert had strong paternal tendencies… On the other hand, he was a self-proclaimed democrat and considered himself to be above petty factional disputes. Ebert was the idol of the revolutionary factions. He was a strong silent type who despised the hierarchical nature of the old order… To his followers within the Weimar coalition, he was often regarded as a saint… But to his enemies, Ebert was the devil incarnate, referred to by a collection of derogatory titles (the ‘November Criminal’, the ‘Traitor to Germany’, the ‘Back Stabber’).”
Matthew C. Wells

1. Freidrich Ebert was the leader of the Social Democratic Party (SPD) and a former unionist and socialist, however, his political views had moderated over time.

2. Ebert became a government minister in October 1918, then replaced Max von Baden as German chancellor in November, following the abdication of Wilhelm II.

3. Ebert chaired the National Assembly that formulated the Weimar system of government. It also confirmed him as the first president of the Weimar Republic.

4. Ebert’s actions led to radical breakaway factions of the SPD, such as the Communist Party. He opposed the Spartacist Uprising and called in Freikorps units to quash it.

5. These decisions made Ebert popular with moderates but a controversial figure with political radicals. He was despised by extremists on the far-right and far-left and their attacks contributed to his declining health and death in 1925.

Citation information
Title: “Ebert and the birth of the Weimar Republic”
Authors: Jennifer Llewellyn, Steve Thompson
Publisher: Alpha History
URL: https://alphahistory.com/weimarrepublic/ebert-birth-weimar-republic/
Date published: September 9, 2019
Date accessed: Today’s date
Copyright: The content on this page may not be republished without our express permission. For more information on usage, please refer to our Terms of Use.