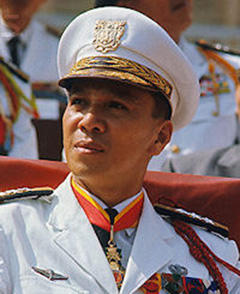 >Nguyen Van Thieu (1923-2001) was a South Vietnamese army officer who later served as president of the Republic between September 1967 and April 1975.

Thieu was born to a family of wealthy peasants in Ninh Thuan province, on Vietnam’s south-central coast. He received an education in a French school and later converted to Catholicism.

During the early 1940s, Thieu fought with the Viet Minh, until dissatisfaction with their methods saw him defect to pro-French groups in 1946. He joined the South Vietnamese military and received extensive training in Hanoi, France and the United States.

Thieu became a supporter of Ngo Dinh Diem, joining Diem’s Can Lao party in 1962. He became disillusioned with Diem’s presidency, however, and participated in the November 1963 that displaced him. Thieu was promoted to the rank of major general in 1964. He became part of the military junta that took charge of South Vietnam, serving as ‘second fiddle’ to Nguyen Cao Ky.

Under pressure from the US, the junta held democratic elections in September 1967. Thieu was elected president of South Vietnam after winning 34 per cent of the vote.

As president, Thieu promised democratic government, social reforms and a crackdown on corruption. In the first two years of his rule, he removed corrupt officials and implemented a land reform program that was mostly successful. Thieu was reluctant to risk his own power by allowing democratic reforms, however.

In the 1971 presidential election, Thieu received 94 per cent of the vote – but international observers claimed the election had been rigged.

From 1969, Thieu was under pressure to expand and strengthen the South Vietnamese Army (ARVN), to accommodate Richard Nixon’s ‘Vietnamisation‘ policy. The lack of progress contributed to a difficult working relationship between Thieu and his government, US commanders in Vietnam and the White House.

In October 1971, the US asked Thieu to approve a draft peace agreement, which he refused to do. This prompted Nixon and Henry Kissinger to negotiate a secret deal without Thieu’s involvement.

Thieu was forced to accept the Paris peace accords (January 1973) but only under the threat that all US aid would be withdrawn. Privately, the president believed that Washington had betrayed him.

Thieu resigned the presidency on April 21st 1975, nine days before the fall of Saigon. His final public address contained an extraordinary verbal attack on the American government, declaring the US withdrawal “an inhumane act by an inhumane ally”.

Thieu fled Vietnam soon after and later settled in the US. He died in Boston in September 2001.