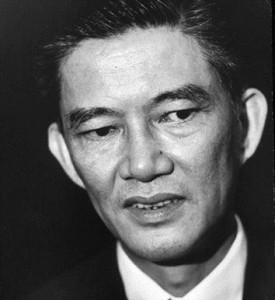 Ngo Dinh Nhu (1910-1963) was the younger brother of Ngo Dinh Diem, his internal security chief and a significant leader in South Vietnam.

Born near Hue, Nhu was raised Catholic and educated in Paris. After returning to Vietnam he worked as an archivist in Hanoi’s National Library. Nhu was also an organiser with Catholic labour unions, which brought him to the attention of both French colonial authorities and nationalists alike.

In 1943, Nhu married Tran Le Xuan, a Francophile socialite and former dancer who was 14 years his junior. In early 1945, Nhu was expelled from his position at the library. He was then forced into hiding during the Viet Minh’s August Revolution in 1945, eventually reuniting with his wife and child in southern Vietnam.

When Ngo Dinh Diem was elevated to the leadership of South Vietnam in 1954, Nhu became his principal advisor on politics, policy and security and worked behind the scenes to consolidate his brother’s power. In August 1954, Nhu organised the Can Lao, a political party intended to provide support and legitimacy for Diem. Can Lao remained small, however; its membership never exceeded 50,000, the vast majority its members were government officials and acolytes of Diem.

In 1955, Nhu engineered the ousting of Emperor Bao Dai, culminating in a republican referendum in October 1955 that was almost certainly rigged. Nhu headed South Vietnam’s secret police and largest intelligence agency and even commanded his own private army. He used these resources to protect his brother, thwarting several anti-Diem plots and coup attempts. This was done with a considerable amount of brutality: it is believed that Nhu’s forces may have been responsible for as many as 100,000 deaths in the late 1950s.

Ideologically, Ngo Dinh Nhu was a quasi-fascist and an admirer of Nazi Germany. He profited heavily from the illegal trade in opium and was himself an addict, spending hours each week doped.

Nhu had links with the US Central Intelligence Agency (CIA) during the early 1950s – but by 1960 the Americans had grown tired of his brutality, corruption and links to organised crime. In 1963 Nhu’s forces were responsible for implementing Diem’s anti-Buddhist policies and suppressing Buddhist demonstrations. This, along with inflammatory public remarks by Nhu’s wife, marked the death knell of the Diem-Nhu regime.

Diem and Nhu were arrested and executed during a coup d’etat in early November 1963.