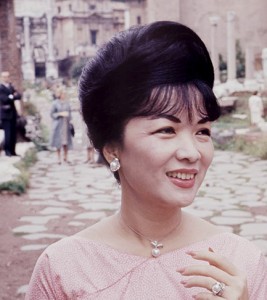 Tran Le Xuan, better known in the West as Madame Nhu (1924-2011) was the wife of Ngo Dinh Nhu, the sister-in-law of Ngo Dinh Diem and a high profile figure in South Vietnam during the early 1960s.

Tran Le Xuan was born in Hanoi to an affluent Francophile family; her father was a Paris-educated lawyer, her mother’s family had connections to the Nguyen royal court. Le Xuan attended a prestigious French school in Hanoi but was a poor student and failed to graduate. She spoke fluent French and English but her command of Vietnamese remained limited. She married Ngo Dinh Nhu, then a librarian 14 years her senior, in 1943.

During the August Revolution (1945), Viet Minh agents targeted prominent Francophiles in Hanoi. Nhu was forced to flee and Le Xuan and her first child were captured and exiled to a remote village for several months.

In 1955, Le Xuan and her husband, at the invitation of Ngo Dinh Diem, moved into the presidential palace in Saigon. Since Diem was a lifelong bachelor, Le Xuan became the de facto ‘first lady’ of South Vietnam, hosting dinners and receptions for visiting dignitaries and attending public ceremonies.

Le Xuan soon gained notoriety for her expensive tastes: she travelled in Mercedes cars, wore French fashion and diamond jewellery, and had an expensive statue of herself commissioned and erected in Saigon. She also became involved in domestic politics, much more than was appropriate for someone of her inexperience and limited education.

Despite holding no official position, Le Xuan issued several palace decrees, outlawing activities that offended her Catholic sensibilities. Divorce, abortion, contraception, astrology, adultery, beauty contests, even dancing were banned on her orders. Despite a lack of experience, Le Xuan’s father was appointed as ambassador to the United States, her mother was made an envoy to the United Nations and two of her uncles were given ministerial posts in Diem’s government.

If all this was not enough to alienate locals, Le Xuan was also given to spontaneous public remarks that ranged from careless to callous and cruel. The worst of these came during the Buddhist crisis of 1963 when Le Xuan told the press that she would be happy to supply gasoline for “Buddhist barbecues”.

Le Xuan’s imperious lifestyle and insensitivity toward her own people was picked up by the global press. She became a figure of perverse fascination in the West, a symbol of the Diem regime’s corruption and disregard for its own people.

When Diem and Nhu were arrested and executed in November 1963, Le Xuan was on a propaganda tour of the United States. She did not return to South Vietnam, moving with her children to Europe. She lived in Rome until her death in April 2011.