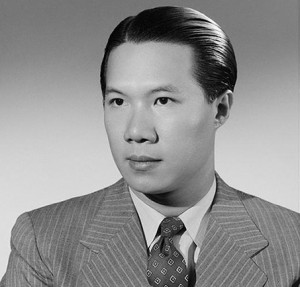 Bao Dai (1913-97) was the last ruler of the Nguyen dynasty and the last emperor of Vietnam.

Born Vinh Thuy in October 1913, he became emperor on the death of his father in November 1925 and assumed the name Bao Dai, meaning ‘preservation of grandeur’. The teenaged emperor then spent several years living and studying in France, while a council of regents fulfilled his duties in Hue.

The young emperor returned to Vietnam in 1932, filled with ideas for reforming and modernising the government. Bao Dai had no real power and implemented no significant changes. His attempts at political, judicial and educational reform were blocked by French administrators and their collaborators in the royal court.

The young emperor abandoned his plans for government and became a figurehead rather than a true leader. For a few months in 1945, he was the nominal ruler of Vietnam. In reality, he remained a puppet of the Japanese occupation force.

When Ho Chi Minh and the Viet Minh declared Vietnamese independence in September 1945, the emperor readily agreed to abdicate. He accepted the honorary title of “supreme advisor” before again moving abroad.

Despite living almost exclusively in France, in 1949 he was installed as ‘chief of state’ of the revived French colonial regime. The withdrawal of the French in 1954 prompted Bao Dai to again attempt to form a working government in Vietnam. His plans were again thwarted, this time by Washington, who urged Bao Dai to appoint Ngo Dinh Diem as prime minister of South Vietnam.

In 1955, Diem removed the Nguyen dynasty from power with a referendum that was probably rigged. South Vietnam became a republic, the imperial throne was abolished and the former emperor returned to a life of exile in France. He spent the rest of his life in Paris, making only occasional public comments on the situation in Vietnam.