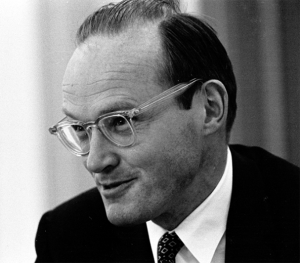 McGeorge Bundy (1919-1996) was the National Security Advisor to American presidents John F. Kennedy and Lyndon Johnson. He played a significant role in involving the United States in Vietnam.

Bundy was a member of the ‘New England elite’, born into a prominent Boston family and educated at Yale. He served as an intelligence officer in the United States Army during World War II, after which he took up academic positions at Harvard.

Despite being a nominal Republican, Bundy assisted John F. Kennedy with his 1960 election campaign. He was later offered an advisory position in Kennedy’s administration. Bundy’s role was to collect, assimilate and interpret information from the Department of State and the Department of Defence, then to deliver it to Kennedy in a concise and understandable way. Kennedy came to rely heavily on the highly intelligent and quick-witted Bundy, more so than some of his cabinet members.

Bundy was an important contributor to Kennedy’s decision making during the Bay of Pigs affair (1961) and the Cuban missile crisis (1962). He also supported an escalation of US involvement in South Vietnam, recommending higher levels of aid and greater numbers of military advisors.

In 1963, as a military coup was forming against Ngo Dinh Diem, Bundy advised Kennedy to allow it to proceed.

After Kennedy’s assassination, Lyndon Johnson retained Bundy as his national security advisor, as well as appointing him chairman of the 303 Committee, a group overseeing covert operations.

In 1964-65, Bundy became an outspoken ‘hawk’ in the Johnson administration. He urged the use of US combat troops in South Vietnam, as well as bombing campaigns against the North. If South Vietnam fell, Bundy said, “there would be a great weakening in free societies in their ability to withstand communism”.

Bundy also argued against entering into negotiations with Hanoi or the Viet Cong, seeing it as a futile exercise.

Tensions with Johnson led to Bundy resigning from the government in early 1966. He later headed the Ford Foundation, a philanthropic, welfare and cultural group, and lectured in history at New York University.

Unlike former defence secretary Robert McNamara, who has reflected critically on his role in the Vietnam War, Bundy rarely spoke or wrote of it. He died from a heart attack in 1996.