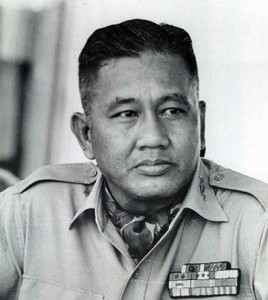 Duong Van Minh (1916-2001) was a general in the South Vietnamese Army (ARVN), the leader of the coup that deposed Ngo Dinh Diem and, for a brief time, the president of South Vietnam.

Born in My Tho province on the Mekong Delta, Minh was the son of a prosperous Francophile landlord. The young Minh was educated at French schools in Vietnam and a prestigious military academy in France. He served with French colonial forces in World War II and was captured and tortured by the Japanese, losing all but one of his teeth.

During the early 1950s, Minh also served with the CEFEO against the Viet Minh; he was captured by them in 1954 but escaped after killing a guard.

Minh relocated to Saigon and headed military action against the private armies of the Binh Xuyen and Hoa Hao. A large and colourful figure, ‘Big Minh’ (as he was known) was popular both with ARVN soldiers and the people of Saigon. Minh was supportive of South Vietnamese prime minister Ngo Dinh Diem, at least initially.

By 1960, however, Minh was beginning to lose faith in Diem and his government. During a coup attempt in November 1960, Minh chose not to come to Diem’s assistance. Diem’s campaign against Vietnam’s Buddhists prompted Minh – who was himself a Buddhist – to launch his own coup. In November 1963 Diem and his brother Ngo Dinh Nhu were arrested and killed, probably on Minh’s orders.

For the next three months, Minh headed the military junta that ruled South Vietnam. He was briefly sidelined but returned to serve as South Vietnamese president between February and August 1964.

Growing American involvement in Vietnam saw Duong Van Minh retire from the ARVN and withdraw from the spotlight. He remained popular with many South Vietnamese and briefly considered a return to politics in the early 1970s, before withdrawing. In April 1975, two days before the fall of Saigon, Minh was appointed president after Nguyen Van Thieu fled the country.

Minh attempted to negotiate a transfer of power with the invading North Vietnamese but was forced to offer only a meek surrender. He was permitted to live freely in Saigon for several years, eventually relocating to France (1983) and later to California. He died in Pasadena in August 2001.